Along with all the granola I've been churning out (I think I've made 8 batches in the past week), the puppy biscuits and the biscotti, I've also made some delicious misshapen brown blobs: 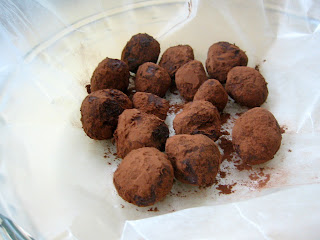 I used this cardamom truffle recipe and substituted lavender for the cardamom. Then today I made a batch with orange zest and a little triple sec. They taste great, especially the lavender ones, though I don't quite have the hang of getting them into a round shape--I tried a regular spoon, I tried a melon baller, I tried a very half-spherical tea spoon but only got a few with a reasonable curve to them. So mine are "rustic" if you are feeling nice, and "lumpy" if you aren't feeling so nice. 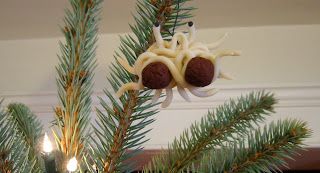 My Flying Spaghetti Monster Tree Topper was calling for an offspring. It's lonely being the only deity on a tree so here you see the yarny momma (poppa?) reaching its noodles down towards its new clay ornament buddy. 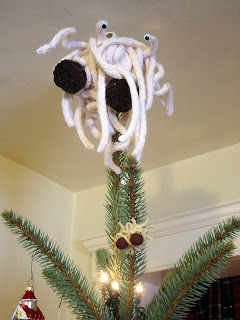 The Fimo meatballs turned out much more spherical than my truffles, but then polymer clay doesn't melt in your hands when in the process of being rolled. After making truffles though, you have a fine excuse to lick your palms, which I don't recommend doing after rolling polymer clay. Keep your brown blobules straight so you don't eat the wrong ones!
Posted by Kate at 2:28 PM

The trick to the brown blobules is to get cocoa powder all over your nice, clean hands, and roll them between your palms so that (a) they don't stick, and (b) they get nice and roundish. Then roll them in cocoa again. Or crushed almonds, or crushed peppermints, teeny chocolate chips or some other crushed delicacy. The lavender ones sound divine.

You have truly been touched by his noodly appendage ;)