I think (hope) it's time to wake up this blog again. Since I went dormant here*, we have mostly completed a major construction project which doubled the size of our previously wee home. I love the new space, but can't say I loved the process. It took over my life and not in a good way.

But rather than attempting to summarize the ups and downs since I last posted, let's just jump right back in with a lovely event that took place last year and which includes both a good book to recommend and a terrific recipe: the November meeting of my book group. Yep, 12+ years along and we are still meeting pretty regularly! I think there are only three of us who were there at the beginning but in the past year we've welcomed two new wonderful women readers (and cooks) into the fold.

In November we read what turned out to be one of my favorite books of the year, Memory Wall by Anthony Doer. It's too late of a recommendation for you to make any use of for this Christmas (I gave it to two people on my list) but keep it in mind.  It's a book of short stories and while I enjoyed all of them (not a stinker in the batch) there were two that will never leave me: the title story and one titled "Afterworld." Both made me choke up and feel tender towards the human condition with all its flaws and foibles, which, given that I tend more towards bitterness and negativity in the winter months, is quite a feat. The stories are simply that good.

The theme for our book group dinner was food that are supposed to be good for your memory, which made for an easier task than actually trying to craft a meal from foods mentioned in the stories.  We started with a wonderful carrot orange soup with cashew nuts (a real winner: recipe below). 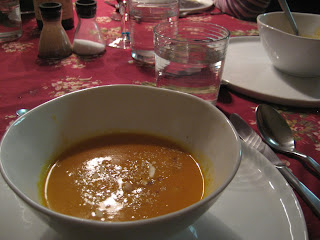 Then we moved on to a plate piled high with maple mustard salmon, roasted brussel sprouts, spinach/beet/walnut/blue cheese salad, a rice dish and quinoa with roasted red grapes. 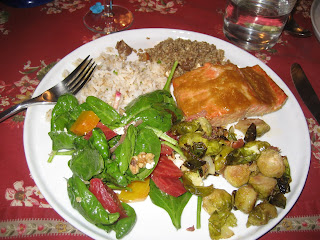 Just looking at that photo makes me feel a tiny bit resentful toward tonight's dinner which can't hope to measure up.

For dessert I made chocolate pots de creme with raspberry whipped cream. Because why not end a big meal with a whole lot of butterfat and richness? 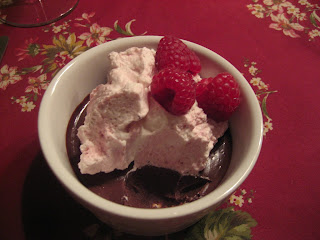 As always, it was an amazing feast; way better than Thanksgiving in my admittedly-not-so-enthusiastic-about-the-culinary-content-of-that-holiday opinion.

Now back to that soup. I know there are a thousand pureed carrot soups out there, but this one struck me as something different. There's no ginger and no curry powder in it, which I found a refreshing change. Instead the carrots are paired with orange juice which gives it a brightness that makes the carrots taste more carrot-y. In many carrot soups I feel like the carrots just serve as a base: something to be pureed to support the spices. But not here. And the toasted cashew nuts that are sprinkled on at the end give it a bit of buttery richness that is most welcome.

In a saucepan, melt butter. Add onion and saute until soft. Add broth, honey, carrots, tomato paste and rice. Bring to a boil then turn down and simmer 30 minutes until the rice is soft.

Time to puree: add the orange zest and juice, cream, cayenne and brandy then use an immersion blender, if you have one, or transfer to a regular blender and puree in batches until very smooth. Strain if you really want it velvety (I've made it a couple of times and the second time I didn't strain it and thought it was fine).

Return to the pot and heat gently. Season with salt and pepper.

______
*While this blog was taking a rest, I did write occasional posts for The Picky Eater Chronicles and kept my annual reading list with comments going (2012 here, and just started 2013).

Glad you are back at it!