What has been coming out of the kitchen

I've mentioned some of the dishes I've been planning to cook with the Tantre bounty; I figured it was about time to show a few of the results. I've made three "keeper" recipes and only had one that I thought was a dud which is a pretty good ratio of successful cooking around these parts. (Recipes at the bottom of the post).

Keeper #1: Spanakopita made with mostly assertive greens rather than spinach. I used one of my 3 bunches of Tantre spinach--about 5 oz or so. The rest of the greens consisted of the radish greens and the spicy greens mix--a huge bunch of mostly mustard and mizuna. Washed, chopped and cooked up with the rest of the pie filling you couldn't tell the difference. This is an excellent way to use up a bounty of greens, particularly if you have folks who aren't as enamored of the sharp, bitter flavor that appears in simpler preparations. (The salad is simply the frilly Tantre lettuce with peppermint leaves and a simple vinaigrette). 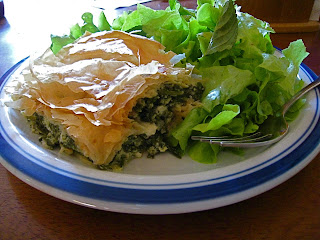 And since I had only used up about a 1/3 of an 8oz roll of filo dough, I made a small pan of baklava too. I just kind of threw together the stuff that should be in there and it turned out surprisingly decent. Then again, how bad can filo, butter, walnuts, cinnamon, honey syrup and orange flower water ever be? 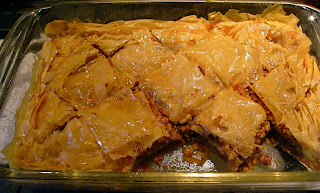 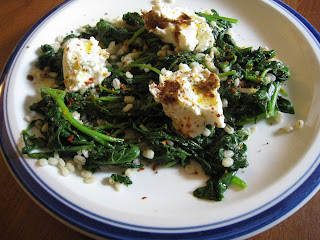 This was terrific. I used one bunch of Tantre spinach and the bunch of arugula. I adapted the recipe from this post on the blog Stonesoup. It was creamy, chewy, a little bitter and very satisfying.

Keeper #3: The feta dressing, here on a chicken Greek salad (which would have looked a lot prettier if I had tossed the greens with the dressing instead of blobbing it on top). This used 2 heads of Tantre lettuce (red and green) and the radishes to which I added some cucumbers, beets, red onion slices, tomatoes, kalamata olives and pieces of roast chicken. 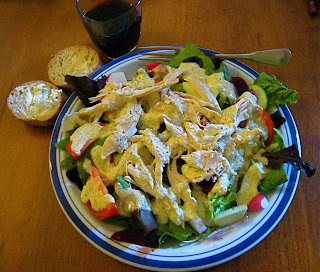 Not a recipe, but a nice combination: A breakfast of garlic naan bread, toasted, with cream cheese, chive blossoms, microgreens, cayenne and black pepper, with a side of radishes 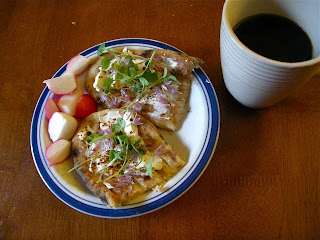 And the dud recipe, Spinach and Green Garlic Soup with creme fraiche: 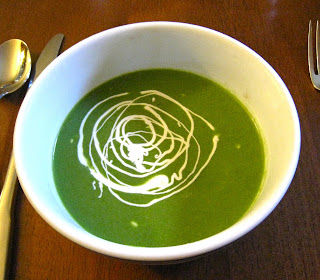 Looks pretty, but the flavor was blah. I stuck to the proportions indicated in the recipe but thought it was thin and could have used something to help give it more substance--maybe a boiled potato? I used up one bunch of Tantre spinach and a lot of the green garlic in my garden but wish I'd found something more worthy of them.

Spanakopita with assertive greens
loosely adapted from this recipe
Directions:
1. Preheat oven to 350 degrees F. Lightly oil a 9x11 inch baking pan.
2. Heat 3 tablespoons olive oil in a large skillet over medium heat. Saute onion, green onions and garlic, until soft and lightly browned. Stir in greens and dill, and continue to saute until greens have softened. Season with salt and fresh ground pepper. Remove from heat and set aside to cool.
3. In a medium bowl, mix together eggs, ricotta, and feta. Stir in greens mixture. Lay 1 sheet of phyllo dough in prepared baking pan, and brush lightly with olive oil. Lay another sheet of phyllo dough on top, brush with butter-olive oil mixture, and repeat process with three more sheets of phyllo. Spread spinach and cheese mixture into pan and fold any long edges of dough over the filling. Layer remaining 5 sheets of phyllo dough, brushing each with butter-oil mixture. Tuck overhanging dough into pan to seal filling.
4. Bake in preheated oven for 30 to 40 minutes, until golden brown. Cut into squares and serve while hot.

Spinach, pearl barley & ricotta salad
adapted from stonesoup
serves 2 as a lunch-sized salad or 4 as a dinner side
1. Place barley in a small saucepan and cover generously with water. Bring to the boil and simmer for 25 - 30 minutes, or until cooked through. Drain and rinse with cold water and transfer to a large bowl.
2. Heat 1 T of clementine or regular olive oil in a pan, add chili flakes and toast in the oil for a minute. Add greens and allow to wilt.
3. Spread spinach/arugula mixture over a serving platter. Scatter the barley around it. Dot with dollops of ricotta. Grate the orange zest over the top and, if you want a little more heat, scatter a few more chili flakes over. Drizzle with the remaining 2 T clementine olive oil and 1 T balsamic vinegar. Sprinkle on fleur de sel and ground black pepper to taste.
Posted by Kate at 7:18 AM

I really appreciated your creative ways for using up so many bitter greens. My garden has exploded with greens and there's only so much salad one can eat a day.

I agree with you on the Green Garlic and Spinach Soup. I made it, and it was just weird. My husband wouldn't eat it, and I struggled through the rest of the batch alone. And I'll eat almost anything. This was the first time a recipe from Orangette has ever steered me wrong.

We split our share, and our splitters like the mizuna, so it's been going to them, but I'll definitely file this recipe, because my family can't take the sharpness.

My success this week was a take on moo shu - I'll send you the recipe link. I used the asparagus, scallions, a huge mushroom I bought from Richard when I picked up my share and... hmmm... maybe that was it. I'm making the thing you posted last week tomorrow. I forgot about my arugula! Looks like it's arugula/goat cheese/fig jam panini for dinner tomorrow night.