A bowl of warmth

It was 19 degrees F outside this morning when the critters and I went on our walk to the Farmer's Market. We go every Saturday morning, partly because I like the ritual, and partly because the boy has a piano lesson later in the morning and if we don't get him some exercise before it, then he! bounces! off! the! walls! and has trouble concentrating on the music. It's about 1 mile each way from our house and that is sufficient to get the spazz out (well, most days...)

There isn't as much to buy in the winter, though we usually still pick up a dozen eggs, some cider, and maybe some hoop-house spinach. And the kids each get a cookie--the kind I don't make at home with frosting and sprinkles--as a reward. I'm kind of amazed that they are always game to go on this forced march with me (they even went last week when there was horizontal sleet hitting us in the face!) but I guess dangling a crappy cookie in front of them does wonders in the motivation department.

So now that we have established that it is cold outside but that we must go out in it, the project becomes making warming foods as a reward for those of us not motivated by crappy cookies. Soup is always good, but I have a new favorite warming dish of late: 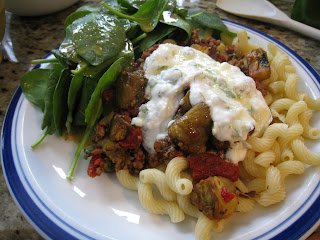 It may just look like pasta with a meaty sauce, but look a little closer. There's ground lamb in there, and cubes of soft roasted eggplant, and some of those slow roasted tomatoes I made last summer. There is a tangy garlic-yogurt-mint sauce to offset the richness. And then, my favorite and the feature that makes the recipe over-the-top-comforting: some browned butter poured over the top.

This tasted really good served with a plain spinach salad with a sharp vinaigrette, but I can also imagine making a big bowl of this and just curling up on the couch with it while reading a good book, or watching a decent movie.

1 large or 2 small eggplants, about 1 pound, in 1/2 -inch cubes
3 tablespoons extra virgin olive oil
1 teaspoon kosher or coarse sea salt, more to taste
3 fat garlic cloves, minced
1 medium onion, minced
1 pound ground lamb
1/4 teaspoon red pepper flakes
Freshly ground black pepper to taste
2 t dried dill
1 C canned diced tomatoes (drained) or your own slow roasted tomatoes, if you have them
1/2 pound bowtie pasta (I made it with bowtie the first time and the corkscrew noodles pictured above the second and kind of prefer the bowties)
2 to 6 tablespoons unsalted butter, to taste
1 cup plain yogurt, set in a towel lined sieve to drain for about 1/2 an hour (or use about 2/3 C Greek yogurt)
1/2 C chopped fresh mint (optional, but good)

wow, that sounds awesome, Kate. I wonder if I can substitute enough things in there to make some version of it at home (minus: lamb, minus: eggplant) since I have a few tubs of slow roasted tomatoes looking for inspiration.

There's some great lamb at the farmers market, too.