We made it through the first week of school (pant, pant) though I do feel like I've just run a marathon after having sat on my butt for a few months.

I did a little therapeutic cooking midweek which was also designed to decrease the insane baseball-bat sized zucchinis that greeted me when we came back from Georgian Bay. I swear the thing was about 5 inches long when we left for a beautiful week of camping and canoeing at Massasauga Provincial Park but I could have easily used the zucchini I found upon our return as a weapon. Since I'm too cheap to throw the massive zuchs away, I figured grating was the answer and Zuccchini Feta pancakes were on the menu. 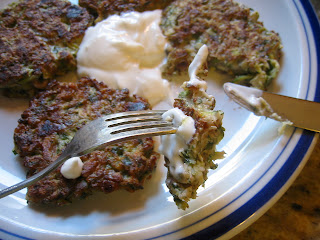 This is the third recipe for Zucchini Feta pancakes I've made this summer and, so far, the best of the three. Unfortunately, I can't remember where I got the other two recipes but both were a bit on the flabby side. So I did a little web searching and decided on a recipe on Epicurious for Turkish Zucchini pancakes; I was swayed by the fact that everyone who reviewed the recipe (a feature I really like about Epicurious, though I often forget to add my own comments to the stream of advice) said that they would make it again--it's rare that a recipe gets a 100% approval rating.

I also liked that these had plenty of flavors added to make up for the blandness of the zucchini--feta, walnuts, dill, scallions and mint. With such a cast of supporting tastes, I probably could have used cardboard as the base and it still would have tasted good. But I dutifully shredded my massive zucchini instead. It was a little scary when I realized that it would only take half of my huge zucchini, even with the spongy core carved out pre-grating, to produce the pound of zucchini called for in the recipe. My zucchini isn't quite the size of Iron Stef's which had to be restrained by a seat belt in the car, but it came pretty close!

The walnuts are a great addition to the pancakes and make them into a substantial dinner. I tweaked the recipe a bit (the original calls for tarragon and even more green onions--1 1/2 cups are plenty!) and served them with a yogurt garlic sauce.

Place grated zucchini in colander. Sprinkle zucchini with about 1 1/2 t salt and let stand about an hour. Squeeze zucchini vigorously between hands to remove liquid.

Film the bottom of large nonstick skillet with olive oil and heat over medium-high heat. Working in batches, drop zucchini mixture into skillet by heaping tablespoonfuls. Fry until pancakes are golden brown and cooked through, about 3 minutes per side. Transfer each batch of pancakes to baking sheet in oven to keep warm. Serve pancakes hot. Makes about 20.

Serve with a yogurt garlic sauce:
Mix 1 clove of minced or pressed garlic and 1 t salt with about 1 C greek yogurt, or 3/4 C of regular yogurt and 1/4 C of sour cream. Stir to combine thoroughly (can also add shredded cucumber, chopped mint or dill, etc.)
Posted by Kate at 3:27 PM

I made up a yellow squash pancake recipe tonight that went like this:

Mix cornmeal, leftover rice, milk together in a bowl.

Keep adding milk and cornmeal until you get a pancake batter. Add salt and pepper and an egg.

Heat up your favorite pancake griddle and put 1/4 cup measures on it. Cook until brown, flip, cook some more.

It's a forgiving recipe, and I didn't measure anything - the leftover rice I used because it was there. They tasted very strongly of the cornmeal, and Saul suggested that I add corn cut off the cob next time for good flavor.