Rather than freak out about school starting and having to wake the kids up at 7 am when their summer bedtime has been around 10:30 PM, I'll focus on something much more enjoyable:

Alcohol
Brian is a great lover of beer, particularly wheat beer. Bell's Oberon is the local wheat beer he prefers, while Franziskaner is the bottled import he buys and Erdinger is the draft beer he drinks when he gets sent to Germany on work trips. Wheat beer is usually fruity and spicy with words like "clove," "toffee," "citrus," and (somewhat alarmingly) "banana" bandied about in reviews. It is also a "premium" beer and pretty expensive.

Brian has talked about home brewing since two of his work friends are brewing aficionados and he has happily sampled their wares. So this summer, he convinced me of the economic sense it made to investment in the equipment, borrowed a friend's deep fat turkey fryer (good for cooking up the wort outside so it doesn't stink up the house) and got started. He made two types on his first attempt: a wheat and a pilsner. 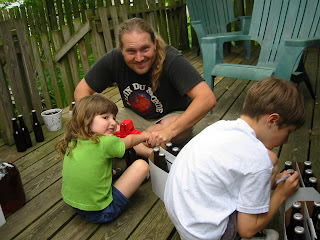 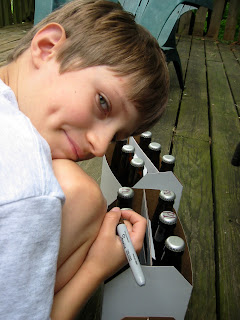 Ian got to write "P1" on all the pilsner bottles, while Fiona got to put smiley faces on the caps of the wheat beers. After the proper number of weeks of waiting we tried the stuff and it was pretty good! The wheat was better than the pilsner, though personally I found the wheat almost too flavorful--great for sipping, but I couldn't finish a whole one without feeling overwhelmed. But Brian and his wheat-beer friends love the stuff. The pilsner had a nice initial taste but no lasting bouquet or depth.

Batch two was another wheat, which turned out well, and a Mexican style lager which, since its yeast requires a cold ferment, is still awaiting judgment.

It's great to see Brian so excited about something in the eating and drinking department; he's happy to taste whatever I cook but I don't think he really got the thrill of a well executed pie, or a tricky fish dish that turned out well, until he started brewing. And I am pleased about the economic side of the process. But he really got my attention and support when he mentioned a few weeks ago that this fall he could try and make me a batch of hard cider, a beverage I dearly love.

When I was a kid, I used to make this stuff under my bed. I wasn't a lush, and wasn't even aware that what I was doing was making the cider alcoholic; I just liked the slight fizz and sharpness that came when the cider started to turn. When a gallon was about half empty, I'd sneak it out of the fridge and hide it under my bed. After about a week, the gallon jug would show signs of swelling and I'd take the lid off and inhale the scent of my yeasty, fizzy apple cider. Since then, I've tried pretty much any hard cider that crossed my path with my two favorites being the cloudy, potent Scrumpy from the West Country in England, and dry, champagne-like Cidre Brut from Normandy.

I'll probably call our local cider mill, the Dexter Cider Mill, which still uses 100 year old equipment and an oak press, and see if we can do some sort of bulk buy to keep the price from being too outrageous.

If anyone has experience making hard cider and tips to pass on, please do!
Posted by Kate at 6:21 AM