What 2-buck-chuck was made for 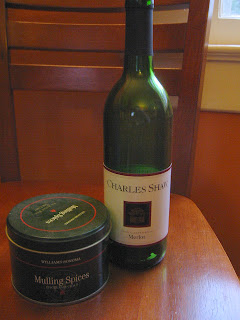 Mulled Wine!
I'm not the biggest fan of egg nog. Once in a while a little bit of it amply fortified with whiskey tastes good, but most of the time egg nog is too rich for me. I feel like I'm drinking creme anglaise and while I like creme anglaise in its proper place (that is to say, accompanying a dessert), I don't choose it as a beverage. Mulled wine is much more my kind of holiday beverage and it also serves to scent the whole house with its spicy bouquet. The Williams Sonoma stuff is a good lazy-person's alternative to digging around in the spice cupboard to locate the appropriate items, but it is pretty darn simple to assemble your own. Some cinnamon sticks, allspice berries, cloves, ginger slices and a star anise or two if you are feeling exotic combined with the wine, some sugar and citrus peel can be combined in about 5 minutes. Some people also add brandy, but since I like to sip mugs of this stuff all day long (on the weekend--I try to stay sober when weekday responsibilities are involved) I leave the brandy out or else I'd be, as the Brits like to say, blotto.

Yesterday, while on my third (or fourth?) mug of wine I sat down and finally finished sewing this totebag as a Christmas gift for my dear sister: 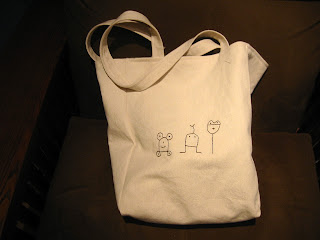 On the front are three of Fiona's little alien drawings that I embroidered. From left to right they are Momo, Mi and Fomi. Mi is my favorite. And inside is a soft doty flannel lining: 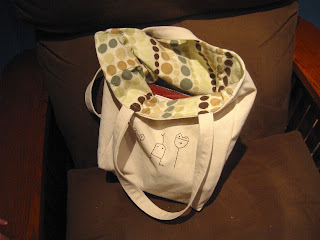 One bottle of cheap dry red wine
1/3 C sugar
2 T of spices--lots of whole cinnamon sticks and whole allspice, some whole cloves (not too many--those little buggers are strong), slices of fresh ginger, a star anise or two if you are feeling exotic
strips of lemon and orange peel
1/2 C of brandy (optional)

Put the spices in a large tea-ball or tie loosely in cheese cloth. Heat up the red wine, sugar, spices and peel until steaming. Let spices steep for at least 20 minutes--remove spices and peel after about an hour (it'll get really strong if you forget and leave the spices in, in which case you can dilute it down with another bottle of wine and some more sugar). If you don't plan on sipping this all day long and want it to pack more of a punch, or if you want a more intense day-long buzz, then add the brandy too.
Posted by Kate at 8:04 AM