I don't know about you, but I am heartily sick of roasted vegetables at this point in the winter. Roasted cauliflower, broccoli, brussels sprouts, butternut squash, sweet potatoes, regular potatoes, parsnips, carrots, I could go on and on. I welcomed them when they first appeared in the autumn and happily consumed them with the roasted garlic, lemon juice and zest, black pepper and grated parmesan which works on just about any vegetable to make it taste great.

But I've had enough. Maybe it was the 14.1 inches of snow that fell a few weeks ago, or the heavy gray skies, or the stir crazy feeling of being inside too much because the windchill makes my face feel like it's going to fall off. It isn't fair to the roasted vegetables, but they are getting lumped in with everything wintery that I'm sick of (along with hot chocolate, hearty soup, fires in the fireplace, cozy wool sweaters and other things that were pleasant when they first appeared but have outlived their welcome.)

Rather than purchase disappointing tomatoes and other summer vegetables, I hit the Asian grocery store. Yesterday I picked up a massive bag of baby bok choi. They looked so alive and promising and like the antithesis of cauliflower.

But then I got home and realized I don't really have any recipes for baby bok choi. I usually chuck one or two into a bowl of udon, but I'd be eating udon every hour if I wanted to get through all these before they spoiled. (Besides udon is soup which, as I mentioned above, I'm pretty sick of.)  Also, to compound the challenge, Brian is out of town and my kids don't like bok choi (maybe because they've only been served it limp in udon...) so I needed a recipe that could use up a lot of it and that was tasty enough that I'd want to eat it all.

Happily I can report success! I found a recipe in Fine Cooking that consists of basic sautéed baby bok choi that gets interesting by being doused in a warm miso ginger vinaigrette. It is bright and zippy and crunchy and fresh and an excellent antidote to the frozen dingy piles of snow outside. For lunch today I ate 1/3 of the big bag of baby bok choi that I'd purchased and can easily see replicating this again in the coming days.  Did I mention that it was fast and easy? It is. Next time I'll probably put it on top of some brown rice and add a little cubed firm tofu in with the bok choi, but it was excellent on its own too. 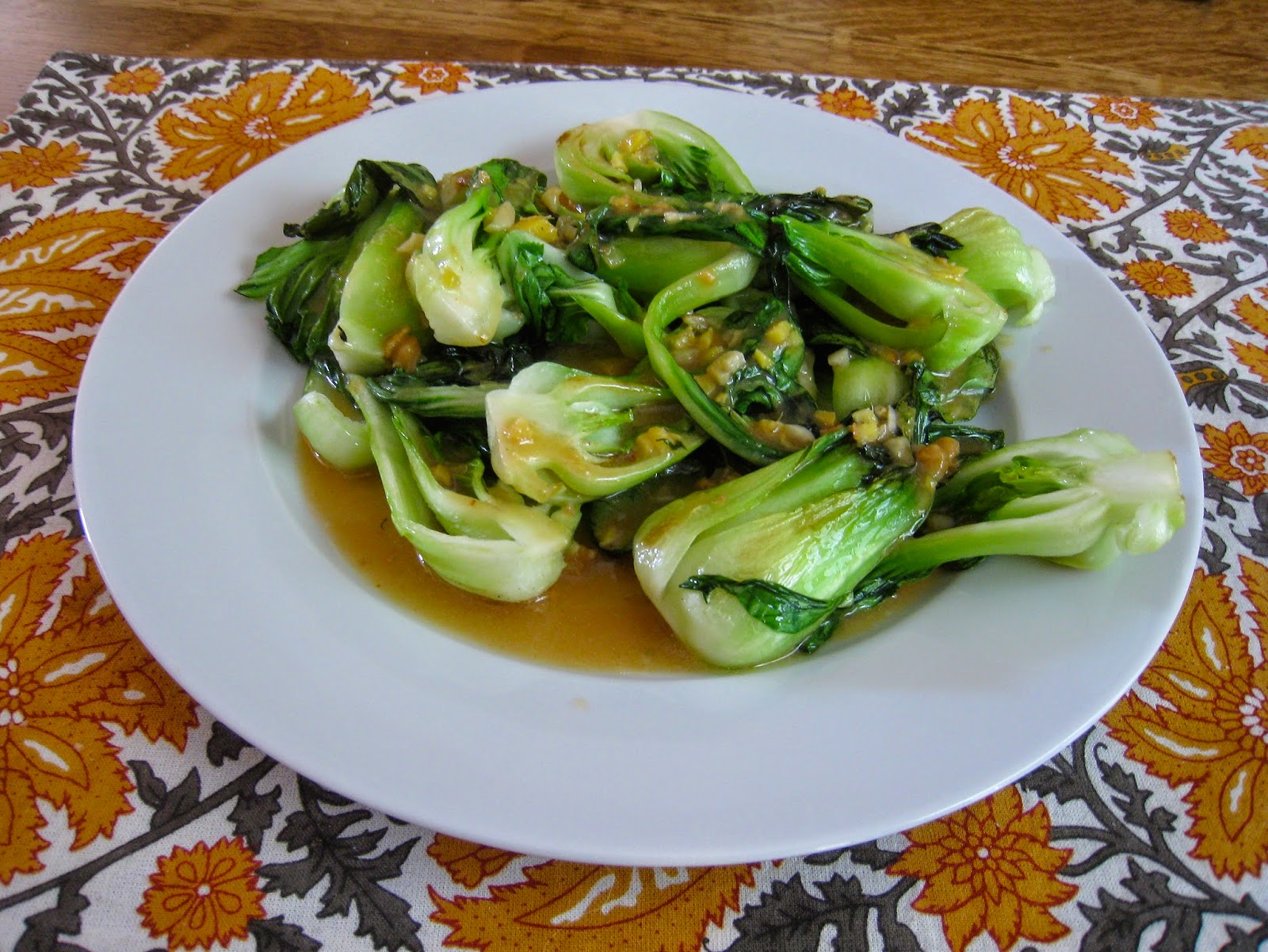 Ingredients:
baby bok choi (as many as you want to eat)
some neutral oil
a clove of garlic
a small nob of ginger
miso (I used white but any kind will do)
a lime (if you have it)
mirin
rice vinegar (or white wine vinegar)
Sriracha or your favorite hot sauce
sesame oil

Cut the baby bok choi in half.
Chop up the garlic and ginger.

Get a big skillet or wok to saute the bok choi and a little skillet for the miso vinaigrette. Pour a little oil into each and turn on the heat. When hot, toss the bok choi in the big skillet and the ginger and garlic in the small one. After about a minute, turn the heat off under the small skillet and plop in a spoonful of miso and a glug of mirin. Use a whisk to blend the miso and mirin until there aren't any lumps of miso. Then add a little vinegar and whisk again (meanwhile you are occasionally tossing the baby bok choi with a pair of tongs.) Squeeze in half a lime (if you have it) and whisk again. Put in a squirt of sriracha, whisk and then give it a taste. Do you want it sweeter? Add a little more mirin. More acidic? Add a little more lime or rice vinegar. Saltier? A little more miso. Once it tastes good to you, add a little bit of sesame oil, dump the baby bok choi (which have wilted but are still crunchy at the base) onto a plate or serving platter (if you plan to share) and then pour the vinaigrette over the top. Cooking time total was about 5 minutes; tack on a few more for prep and you can have a plate of these sitting in front of you in about 10 minutes--faster than takeout!

This is a perfect recipe. I just bought 4 baby bok choys and I had no idea what to do with them. Thanks, Kate!

They are tempting little bundles, aren't they? They just look so fresh and good and not like winter on the shelf.

You are such an inspiration, Kate. Damn.

Back again for your granola recipe, but now thinking about baby bok choy too.