In these days of spinach bounty, here's how I take what seems to be an overwhelming quantity of leafy goodness that is busting out of the crisper drawers and threatening to creep into the container of yogurt on the shelf above and render it docile and tidy (the spinach, not the yogurt which tends to stay where you put it). And tasty. Very tasty.

The magic words are: Goma Ae. Brian and I used to order this when we went out to Japanese restaurants (ah, the days before GM was teetering on the edge of bankruptcy) but that was before we realized that we wanted to eat a much bigger quantity of it than any restaurant ever served and that it was so darn easy to make.

Take about 1.5-2 lbs of clean spinach. Pinch off the stems if they are tough. Dump the spinach (you can also add in other relatively tender greens--I put some mizuna in this batch) in a big pot of boiling water to blanch, then quickly rinse under cold water. Once it is cool you squeeze it like hell to get all the water out until it is about the size of a softball: 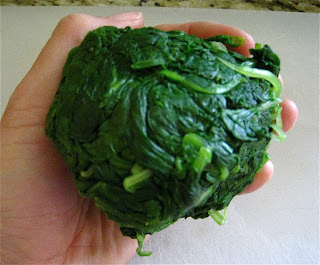 (If only all such unruly things were this easily contained. Kids...?)

In your mortar put 2 T roasted sesame seeds (you can see I buy the pre-roasted ones at the Asian grocery). 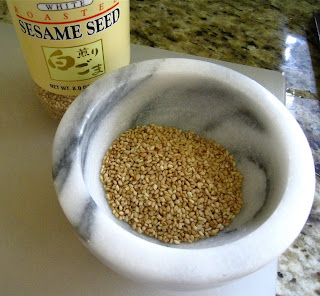 Pestle-ize them to a fine-ish grind: 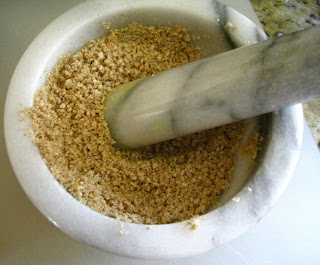 Then add 2 T soy (I use Japanese lower sodium), 1 T rice wine vinegar, 1 T mirin, and 1 t sugar and mix it all together. 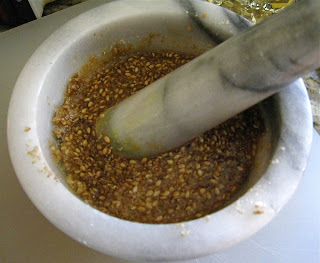 (I would bet that the above slurry can also be made in a blender if you don't have a mortar and pestle or if your forearms are just too darn tired today for all the grinding. My blender is putting me through hell at the moment by leaking all over the counter no matter how carefully and tightly I attach the base to the jar so I'll stick with the mortar for now.)

Chop the spinach coarsely, put it in a bowl and then dump the dressing over your chopped spinach. Drizzle on 1 t toasted sesame oil. 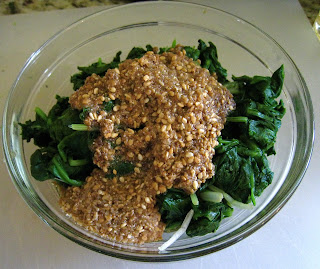 Use a fork to distribute the dressing and break up the clods of spinach. 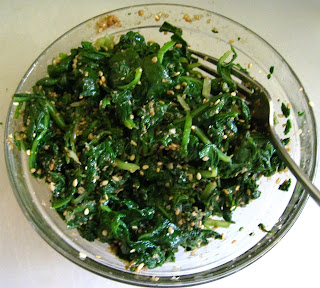 Number of servings depends on the level of goma ae enthusiasm in your house. Brian and I can easily polish of a bowl this size but then we are a little piggy when it comes to this stuff.
Posted by Kate at 3:54 PM

Oh my goodness... thank you for this recipe! I've loved this in Japanese restaurants and had no idea it was so relatively easy to make!