It is hot and humid and now is a fine time to share the best damn summer beer snack I've ever had. It also helps that it is so easy you can even assemble it after having had a number of beers on an empty stomach.

My friend Juliet introduced me to this after she lived for a year+ in Vietnam with her anthropologist husband, Ken. You take a lime, squeeze it into a bowl or on a plate, chop up a chile (I use serrano or jalepeno, but really any spicy variety will do fine), then pour about a tablespoon or two of kosher salt in the middle of the lime juice puddle. This will be your salty/sour/spicy dipping sauce for raw cucumber spears. Obviously fresh, unwaxed cukes from the farmer's market or your own garden are the best for dipping, but really even supermarket waxed ones are ok; you just might want to do some peel removal. 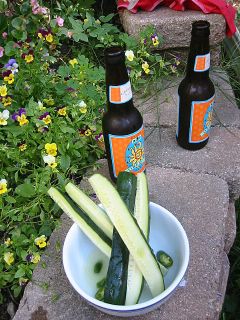 It sounds too easy and too basic to be so appealing, but try it. It really is my favorite summer beer snack--refreshing and crisp, salty and sour, and if you want a little more kick, just mash your cuke into the hot peppers. The only warning I give is that this really isn't something you serve to people who are sensitive about double dipping. If they are the intended eaters, cut the cukes in smaller bite sized pieces.
Open yourself a cold one (Bell's Oberon was particularly tasty this afternoon) and enjoy the flavors of summer.
Posted by Kate at 4:22 PM

I'll be taking this to a friend's deck party tonight. When picking up my Oberon from CHEESE, Cheese, cheese today I told Dan about this and he asked for the recipe, so I sent him a link to your site.

Hmmm... sounds interesting... Could one perhaps make a sort of salad - bite sized chunks marinated in the mix? Sounds super!

I don't know if it would work as a salad or not--the dip stuff is so intense that if it wasn't eaten right away I think the salad would become intollerably sour/salty/hot. I love a good cucumber salad but I don't think I've made a dressing this strong for one. If you try it as a salad (which would be a handy way to deal with double-dipper-phobes), let me know!