Yesterday was a mish mosh kind of day, unfocused and all over the place.

There were a few memorable moments which included Ian making and enjoying his first recipe for Homemade Lemon-Lime Soda Pop. I have been trying to get the kid into the kitchen for years, but his disinterest in food and food preparation has been extreme. What got him in yesterday? I put it down to the magic of Saul. Yesterday afternoon, Saul gave Ian a birthday present--his first cookbook and the ingredients to make the soda pop (a lemon, a lime, sparkling water and apple juice concentrate). The cookbook is Pretend Soup by Molly Katzan--I checked this out from the library last year on Saul and Deb's recommendation and couldn't get Ian to even sit still to look at it. But getting a copy as a gift from one of his favorite people seems to have done the trick--Ian read the whole book yesterday, even the recipes that included vegetables, and was eager to get in the kitchen and make the soda. It is the best kid's cookbook I've seen with pictorial recipes that kids can follow easily.

And here is a photo of him enjoying his soda: 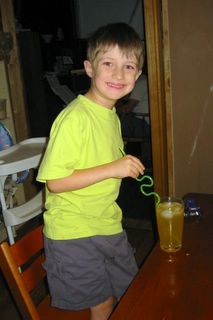 And we all know that a yellow wiggle straw makes it taste even better.
Here is to hoping that I can convince him to make a bagel face in the near future--it includes small quantities of many vegetables that Ian hasn't put in his mouth in about 3 years. I think I'll increase the likelihood of success and invite Saul over to make them with us. 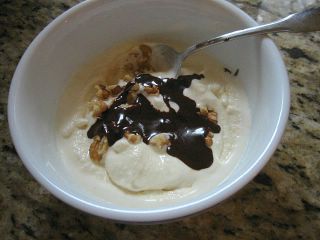 My version of Chunky Monkey.
It was good and banana-y, but too sweet for me. Unfortunately I made the too-sweet custard for it in the morning. Later in the afternoon I got to hang out for a while with Lynne and Deb both of whom have been making homemade ice cream for years. They agreed that almost all ice cream recipes have too much sugar for their tastes so they always cut it back. Next time I'll remember their advice. The gelato I made on Saturday wasn't too sweet thankfully.

And to finish out a mish mosh day I read through the second story of Joan Silber's Ideas of Heaven (another of the 2004 NBA finalists) and tried on my new socks for the first time: 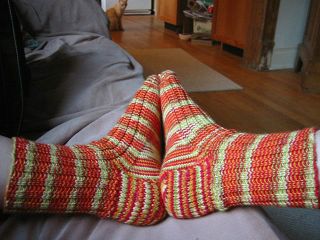 Made with Knitpicks Memories sock yarn in the colorway Flower Power.
In person they look a little less like peppermint sticks--the orange and green are more prominent than in the photo.

Knitpicks just announced a new solid color superwash sock yarn called Essential which I am going to have to order when I get brave enough to do some lacy or cabled socks.
Posted by Kate at 5:50 AM