Hey look it's been over a year since I wrote anything here.
In that time I:
got mad
got mad again
got mad again
(you get the trend)

2017 was a year of rage and action and more rage and action and 2018 looks like it's going to be more of it; meanwhile the two charming poppets who used to live here have been replaced by teenagers with massive doses of snark (Internal monologue: "Who on earth did they learn that from?" Look in mirror. "Oh yeah...")

I also got old. My freaking body no longer responds to what I put in it with the same ease as when I was a bright young thing of 40 so as I look at the recipes posed on the side bar of this blog I think nope, really tasty but nope, nope, that one's OK, nope, nope. I'm turning 49 in June. It is humbling.

In particular, I've found that me+refined carbs is really not a great combo. Refined carbs are now a treat, not a regular thing so no more weekly homemade pizza nights or regular batches of those fucking amazing lemon scones because at the end of the night I feel like shit and continue feeling like shit for a few days: lethargy, joint pain, fatigue, sluggish thoughts. You know, fun stuff!

Luckily moderation, whole grains and a lot more protein tempers the effect. But you know all this stuff, you've read all the damn studies about what refined carbs do to your entire system and how we all should be eating massive quantities of vegetables (I'm happy to, always have, but I also like to eat other stuff). I have not been transformed into a paragon of virtue. I still eat mac and cheese made with regular pasta and chocolate chip cookies, especially the really good ones made with browned butter. The thing is, I can't do it all the time and I have to be prepared for the blowback.

The more important question which I know you are dying to hear is:

What do you cook now that tastes good and doesn't make you feel like shit afterwards?

So let's start with the smoothie. Most smoothies are evil in a glass because they are composed of fruit and fruit juice which makes my blood sugar spike and then crash and leave me very, very cranky. But smoothies are convenient, especially when you are so wiped out that chewing seems like too much effort and maybe you will just go lie down and rage in a horizontal position until someone notices and feeds you. (Tried that. They just walked by my prone form.) So it was time to come up with a smoothie that wasn't evil.

I get hangry more often now than I used to. No, strike that. I've always been someone who gets hangry. After all, I own this shirt: 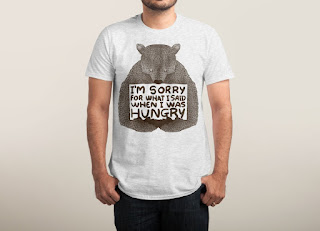 Maybe now I'm getting better at preventing the hunger/anger outbursts? (I ask my kids. They give me the gimlet eye. Guess not.)

But hey, no one notices when you prevent bad behavior, especially when you aren't a toddler. My kids have no idea how often they would be exposed to my outbursts if I wasn't drinking this regularly: 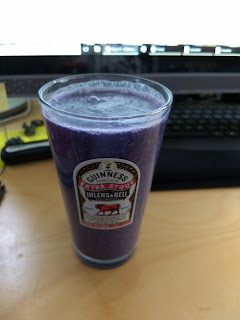 It tastes better when served in a Guinness pint glass.

I call it:
Hangry Prevention in a Glass
It has a shit ton of protein, fiber and hydration (as someone with low blood pressure and a tendency towards dehydration, anything that ups my liquid intake is also a plus)

Here is what goes into the blender: 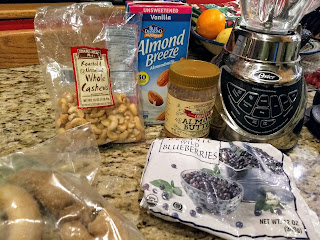 WHIRRR that baby up, drink it down, feel the stability descending upon you. Be warned, it will make your teeth, tongue and lips turn blue so maybe don't drink it on the run unless you want to creep out anyone who looks at you. One of the liberating things about being older is that I now really don't give a shit what people think about how I look. Coke bottle glasses for my myopia? CHECK! A desire to wear floppy comfy clothes all the time? CHECK! Super short hair because caring for anything over an inch requires too much effort? CHECK! So adding blue lips to my daily presentation to the world is just fine by me. I did have someone ask about my circulation once though which means that despite my efforts, I have not become totally invisible. (Which leads me to reconsider that old super-power question: which would you prefer as a super power, to be able to fly or to be invisible? I always went for the former because I assumed that people who chose invisibility were probably creeps who wanted to sneak around and spy on people in their private moments. Now I think they are probably just wise super introverts who want the world to leave them the fuck alone. If that is your rationale for choosing invisibility over flying then I think you are awesome.)