I should explain the silence that settled over this blog on the eve of Thanksgiving. Most of the food blogs I read have been hopping with Thanksgiving recipes, discussions of turkey techniques and the like.

The reason for my silence? I dislike pretty much every traditional Thanksgiving food.

See why I kept my mouth shut before the holiday? I didn't want to spoil the fun for all the folks who love this holiday. Hating Thanksgiving foods seems to cast me as a Benedict Arnold sort of person. I think the sentiments of the holiday are lovely, but I don't understand why the blandest, mushiest, sweetest, gloppiest foods have come to be what everyone expects, but alas, as I live with some people who look forward to this holiday as a return to the foods of their childhood and a break from my kinda cooking, I stand back and let them all be happy while I nibble a brussel sprout or two.

Sure I can chew my way through a slice of roast turkey, that's a pretty basic form of protein and in and of itself, inoffensive. But almost every other food that people like to serve I don't care for (and some I downright despise). They include: stuffing in every form (yes, I've tried it with oysters, cornbread, sausage, and/or chestnuts. I didn't like any of them.), sweet potatoes that have been candied or glazed or marshmallowed (I like sweet potatoes in savory forms--preferably with lots of garlic), mashed potatoes (prefer them roasted), gravy (oil slick), green bean casserole (glop glop), cranberry jelly (I do love fresh cranberry relish of which my sister made a superb variety this year--see recipe below), and pumpkin pie (prefer apple pie or some other pumpkin concoction like pumpkin cheese cake or pumpkin bread pudding).

But now that the holiday is over and I won't ruin any one else's dinner with my sentiments, I feel free to vent them. I made roasted sweet potato fries with smoked Spanish paprika and an apple pie, so there were two things that I did like at the dinner (they were not terribly popular with other people, but hey, they had plenty of other food to choose from.)

There was one superstar at our family thanksgiving meal and he is pictured below: 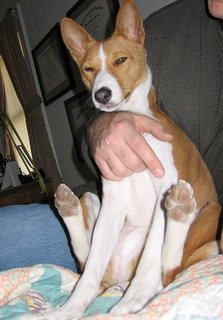 This is Theo the Basenji, a turkey-lover extraordinaire and now known as "Theo my hero"
Theo is my sister's dog and he is a little love. Being a bark-less breed has its pluses but it also means he can sneak around quite effectively without anyone noticing.

We had closed the baby/pet gate that leads to the basement in order to give our cat, Jojo, a little peace since Theo also excels at cat-harassment. But a gate is nothing to a Basenji who smells turkey. My better half brought home an enormous mound of turkey from the family meal (held at my parent's house) and stashed it in the beer fridge in the basement. He had wisely stocked up on two cases of nice beer so that he and Chris could anesthetize themselves against any familial tensions and putting the turkey next to so much beer must have made him a very happy man.

Unfortunately after one basement beverage run, someone left the beer fridge door open a crack and that crack must have allowed the seductive scent of roast turkey to waft up the stairs and be detected by Theo's fine sniffer.

Theo was discovered on the next basement beverage run sitting in front of the fridge burping. He wormed his way under the gate (something our cat can't do--he jumps over the top) and proceeded right to the tray of turkey and ate it all. The crazy thing is his tummy wasn't pooched out even a tiny bit but my sister reported there were stinky turkey farts coming from Theo her entire long drive back to Syracuse.

Oh dear. I tried to make facial expressions approximating sympathy for my crestfallen turkey-less husband, but it wasn't easy.

(For a hilarious story of a Thanksgiving misadventure of a different sort, go to Sara Donati's blog entry.)

And now the recipe for the fantastic cranberry relish that my sister made which most definitely will not appeal to traditionalists:

Martha Stewart's Cranberry Orange Relish
Makes 2 cups (my sister must have quadrupled the recipe since she made tons. And it was terrific the next day too)

Put cranberries in a food processor and chop coarsely. Combine with other ingredients in a large bowl and stir. Refridgerate for at least 1 hour and up to a day.
Posted by Kate at 3:19 PM

Theo is adorable! He looks like his smiling :)
It's good to be individual...it's not set in cement that you must have traditional fare....have what you enjoy!

I'm amazed you haven't been inundated with non-traditional Tgiving recipes--yet! We do eat turkey--I am indifferent to the meat, I consider it simply a vehicle for the stuffing. Yes, guilty as charged, I love stuffing (how could you like bread pudding and not like stuffing????). Sage, chestnuts, the whole thing. My husband's very Irish family would kill me if we forewent mashed potatoes, but I spike 'em with lots of leeks and thyme to make them less tedious. Now the cranberry, that's where I really cut loose. I do a savory chutney with fresh cranberries, tons of shallots, balsamic vinegar, some sugar, a heap of garlic, and fresh ginger. Bleccch to pumpkin pie. Blecch to green bean gloop (I roast root veggies with kosher salt and olive oil instead). Best thing about Thanksgiving: the curried turkey hash I make out of the leftovers!