My son has been introduced to educational eating at Kindergarten. No nutritional value, mind you, but his teacher used food as a tool for understanding science subjects, in this case geology.

I present to you,
Jello Sedimentary Rock! 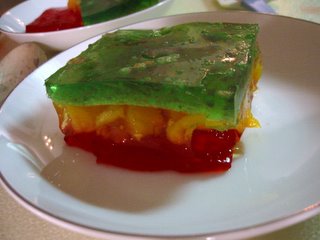 His class has been studying geology in his class (Geology! In kindergarten! They spent 2 months on it and just moved on to studying Kenya) and to get the kids to understand how sedimentary rock is made in layers over time, his teacher made Jello sedimentary rock (the above photo is of our version--the one they did in school had a different top layer). It took a whole week for them to make it which, in Kindergarten terms, is a hell of a long time, though Heidi explained that real sedimentary rock takes a lot longer to make.

The kids even got to experiment with fault lines (mostly strike-slip type faults) as Jello rock is not terribly stable.

Ian was so excited by this whole project that we had to make it at home too. We couldn't find blue Jello so we mixed up our graham cracker crumbs with green Jello and made a dirt and grass top layer.

It tasted pretty disgusting, but Ian was proud as punch explaining the concept to all of us after dinner so we choked it down.
Posted by Kate at 1:13 PM

I think that is the sweetest thing I've read in days! What a great educational idea, a sign of a good teacher.

Maybe not the tastiest of treats but so fun to make!