Yesterday Fiona and I made a load and a half of these black cat cookies for school parties: 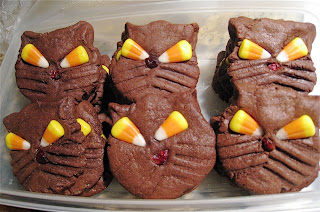 Then in the evening I recovered from the sugar haze in the air by making two of my favorite Indian spiced dishes, one an old favorite and one brand new (apologies for the quality of the photos--we started gobbling before I remembered the camera).

The main course was a chicken dish that I can't believe I haven't posted here before. It's one of the dishes I learned along with the terrific biryani rice in the Indian cooking class I took in 2005. 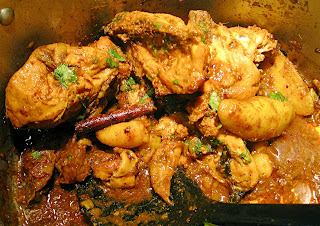 The sauce has a richness that I've only tasted in restaurant Indian dishes, but there is no cream, not even ghee in it. It is the layering of spices that makes it so good. It is cooked up with potatoes; the original recipe calls for 2 medium potatoes but I recommend more, something closer to 4. I had some nice little fingerlings so substituted these and kept the skins on.

One of the coolest things is that despite the fact that the chicken is highly spiced, it is cooked with its skin on and I was able to pull a couple of pieces out, peel off the skin and pull it off the bone and both kids ate it. Neither had a clue that the sauce covered stuff on my plate was the exact same food as what they were consuming. True, Ian dunked his in honey mustard so he probably couldn't taste any of the spices, but Fiona chowed hers down without a blink. Score one for mom!

The vegetable side dish is Spaghetti Squash with Indian Spices out of this month's issue of Fine Cooking and I probably would have overlooked it if two friends, Lea and Sarah, hadn't raved about it. I got to taste Sarah's version and became very territorial of the bowl, circling around it on the buffet and swooping in for seconds as soon as everyone had their first serving. 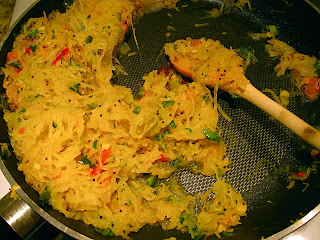 I've never had spaghetti squash this good--onion, ginger and garlic are the base flavors. There are mustard and cumin seeds that provide little pops of flavor and tomato and cilantro to brighten it up. Oh, and there is also 3 T of butter in there...I'm sure it could be removed without much effect, but it does make this dish feel decadent and a little less virtuous (in a fun way!)

So without further blathering, here are the recipes:

2 lbs chicken, cut up in pieces
1/3 C oil
8 whole cloves
4 cinnamon sticks, approximately 2 inches long each
8 whole cardamoms
8 curry leaves (get them at Indian grocery stores in the produce section--then freeze or dry some, they are better fresh but ok frozen or dried and much more convenient)
1 large onion, chopped
2 T fresh masala (chop together about a 1 inch piece of peeled ginger, two big cloves of garlic, 1 chili, about 1/2 t turmeric and a squeeze of lemon juice--I make this in big batches blended together with some canola oil in the food processor and freeze it in 2 T sized portions so it is always ready to go--it is an excellent flavoring base for daal too.)
1 t red chili pepper powder
1/2 t turmeric powder
2 t salt
2 C water
2-4 medium potatoes, peeled and quartered (or use and equivalent quantity of skin-on fingerlings, cut in half lengthwise)
1 medium tomato, diced
2 T Garam Masala
2 T chopped cilantro

Those cookies are so cute! I fully intended to make cupcakes both for my class and for Jeff to take to work, but then promptly forgot about it. Maybe I'll make "fall" cupcakes for November? :)

I've never been a big fan of spaghetti squash, but I might try this one on your recommendation!

I'm with stella on this one - I always think of spaghetti squash as really bland, but this sounds yummy.