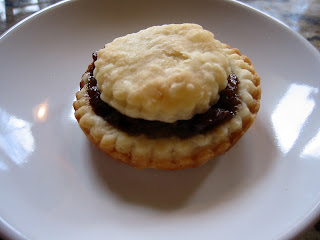 For me the Christmas holiday season isn't about cookies. When I was a kid we made some cut out cookies and decorated them, but they tasted like shoe leather and the eating was never as fun as the decorating. With a British mother, the Christmas flavors that dominated our house were fruit cake, Christmas pudding and mice pies. While I like the first two items, it is the last one that I am just wild about. 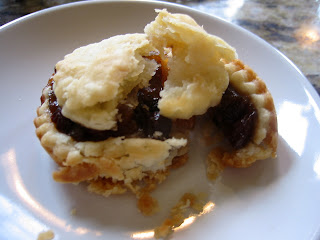 Right after Thanksgiving I was hit with the urge to bake mince pies but I hadn't planned ahead and didn't have any mincemeat on hand so I had to scare up the ingredients and make up a batch. Mine is meatless mincemeat--I'm sure the kind with beef suet is also tasty, but it is a damn sight easier to make the vegetarian kind and then you also won't freak out your friends when you offer them your little tarts. The mix of flavors is pretty complex: there's the dark richness from all the dried fruit and spices like cloves and nutmeg; there's the bite of citrus, both with fresh and candied peel; there's the underlying familiarity and sweetness of the apples which is offset by the sharpness of the vinegar and keeps the whole combo from being too cloying. 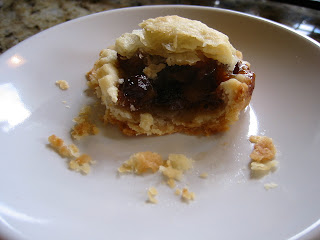 This mish mosh of a recipe is very loosely based on a version in the Fannie Farmer Cookbook which, incidentally, is the basic cook book out of which I learned to cook. Some people have fond memories of Better Homes and Gardens, or Joy of Cooking, but I'm a Fannie Girl (which is also pretty fun to say--Fannie Girl, Fannie Girl!) The recipe also makes a hell of a lot (though you'll need a couple of cups to go in the batter if you are making a traditional English fruitcake) and will keep forever. My mom is making her mince pies from some mincemeat that she made last year and kept in the fridge. There's a glug of brandy in it to (hic!) help preserve it and the acid from the cider vinegar also fights off nasty bacteria. I suppose you could use up a lot of it by making one massive mince pie, but I like a higher pastry to filling ratio to offset some of the intensity of the mincemeat and besides, the little tarts are so easy to grab and stuff in your mouth before anyone notices.

The pie crust I used was the Cook's Illustrated Vodka crust I mentioned before Thanksgiving. I think it is by far the easiest crust to work with--sturdier than my normal crust though still very flaky. It is the first time I've successfully used a food processor to make pie dough--all the other times I tried it turned out tough and nasty--and oh what a pleasure not to have to pick out bits of dough from around my fingernails for hours afterwards.

Simmer everything except brandy in a big pot over low flame until well combined and the apples have softened. Take off the flame and stir in brandy (about a 1/4 cup or so). Keeps in the fridge for ages. 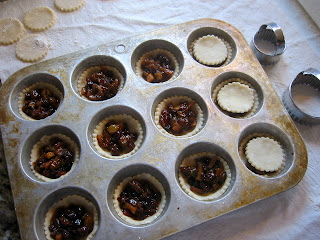 To make into Mincemeat tarts, take your favorite pie crust recipe and cut out large and small circles. Press large circles into muffin tins, add about 2 t of mincemeat and top with small circles. Bake until the pastry is golden (I can't remember the exact time and temp I used, but it was probably 400 degrees for about 20 minutes).
Posted by Kate at 2:21 PM

I don't think I've ever had mincemeat, meatless or no! And although this is a lovely post, I don't think I'm going to be making it this year, either (sorry!). I did want to mention a great picture book about Fannie Farmer: Fannie in the Kitchen: The Whole Story from Soup to Nuts of how Fannie Farmer Invented Recipes with Precise Measurements (whew) by Deborah Hopkinsons and Nancy Carpenter. Enjoy your tarts!