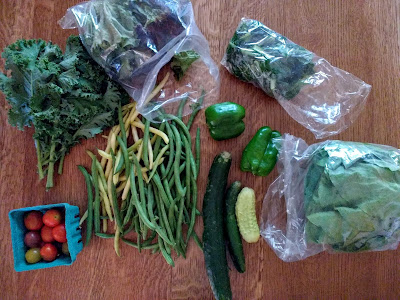 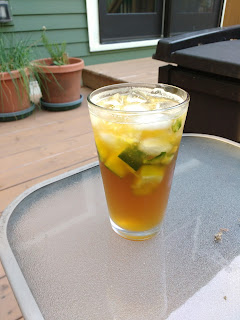 1 bottle Reed's extra strong ginger beer
Pimm's No 1
1/2 a lemon, cut in two pieces
1/2 a lime, cut in two pieces
2 inches of cucumber (preferably with skin on--scrub off the wax if it isn't an organic, uncoated cuke), cut in four pieces
ice

In the bottom of each of two pint glasses put one piece of lemon, one piece of lime and two pieces of cucumber. Take a muddler (or in my case, the handle-end of a wooden spoon) and mash the hell out of them to release the juice from the citrus and create delicious little bits of cucumber to float around in the finished drinks. Put some ice in the glass, add about 1/4 of the ginger beer to each glass, then add the Pimm's to taste (I put in about 2 oz--a good glug), stir it up with your wooden spoon handle, then top with the rest of the ginger beer and stir again. Go find a chair on a deck with a breeze and enjoy.
Posted by Kate at 6:11 PM