The mouthpiece of the neighborhood

My kids drive me crazy on a regular basis. Some times they drive me to this combo 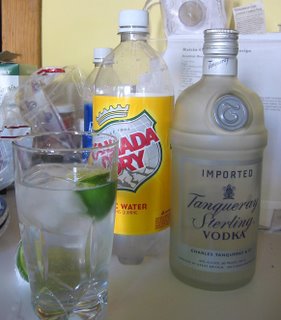 at a time that is not considered Cocktail Hour (but as my friend Jen says, it is 5 o'clock somewhere...)

But other times it is so fantastic to have a kid that you just have to celebrate by making a Lemon Sour Cream Thomas Cake: 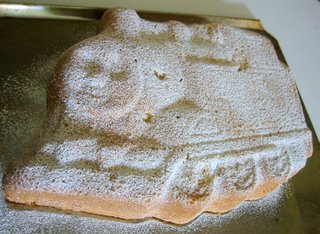 The most recent incident of fabulousness involves my son's lack of inhibition. True, lack of inhibition can cause some embarrassing moments, but it can be useful if channeled properly. This summer we have subletters living in a house that backs up to our yard. Previously there was a lovely Australian woman who rented the place and regularly fostered greyhounds for the Greyhound rescue group. The greyhounds would poke their long noses and narrow heads through the gaps in the fence and look at us a lot. But it was kind of fun being watched by silent, pointy headed dogs. Sadly, the dog-fostering woman moved to Saline.

Now among the occupants next door is a really, really horrible drummer. When he first moved in, practice sessions with his equally horrible band would begin at 9 pm. Within the acoustic vicinity of his house must be about 10 kids under 10 years old, most of whom should have been in bed at that time. After a number of requests by the neighbors/calls to the cops when the "practice sessions" turned into parties and the windows in our house were rattling with the noise at 1 am, the band has decided to practice during the day. While this has improved evening life on our block, playing in the yard in the daytime is now an exercise in noise tolerance if it coincides with band practice.

The drums are bad, the guitar is often out of tune (when there is actually a tune) and the singing sounds like cats being murdered.

My son has never been a fan of loud noises and the fact that the noise from next door is messing with his enjoyment of the backyard fort that his Dad built this spring has resulted in some fantastically uninhibited behavior. He climbs up on the fort and shouts at the top of his lungs "Stop that horrible noise! You are hurting my ears!"

I know I should tell him he is being rude. But instead I just run in the house and snicker and pretend that I don't sanction such behavior.

You wouldn't think that criticism from a 5 year old would make an impression on "musicians" with such crude taste in "music," but hey, I guess that even a wreck of a band wants an appreciative audience. Usually about 5 minutes after Ian starts shouting for them to stop, they actually will. And if that isn't a good reason to bake a cake I don't know what is!

This is a fantastic cake, as well it should be with two whole sticks of butter and a cup of sour cream. The lemon flavor is prominent even though it is supplied only by some zest, no juice at all. It could have a lemon glaze if you want to make the effort, but the whole cake with no frosting and just a little powdered sugar disappeared in about an hour when we had some kids over to play last week.

If you aren't the proud owner of a Thomas cake pan, you could make this in a bundt pan.

In a mixing bowl, cream butter and granulated sugar at high speed until mixture is very light and fluffy, about 5 minutes.

Beat in eggs, one at a time, making sure to scrape down bowl frequently. Blend in lemon zest.

Add flour mixture to the butter mixture alternately with sour cream, adding each in 3 additions. Scrape sides of bowl frequently.

Pour batter into prepared pan and bake for 55-65 minutes, or until toothpick comes out clean. Cool in pan for 10 minutes, the turn out onto plate or platter. Sift powdered sugar over the top.
Posted by Kate at 9:27 AM

One of your best postings yet. I was laughing through the whole thing.

Tonight I made myself a fabulous strawberry shake. I don't know why I never made shakes at home before. Try it:

I guess sometimes parents have to restrain laughter, or at least not openly applaud their actions. I bet a lot of people in the neighbourhood are silently thanking your little guy right now.

Priestess Of Nothing said...

This is one of the funniest things I've read in a very, very long time. I think I've lived next to that band (or their inbred bretheren) and I certainly could've used your little "mouthpiece" then. Go kiddo!

Also, I cannot cook, but your recipe sounded so good, I'm going to attempt your Lemon Sour Cream Cake tomorrow, on my day off of school. Hopefully I can pull this off without setting anything on fire. Thank you for sharing your wonderful story and your yummy sounding recipe! Wish me luck!