I had a birthday recently and my dear family gratified my gluttony with these gifts: 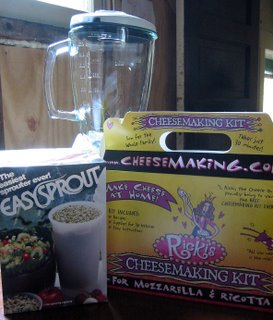 That's an Easysprout, new Braun blender, and a mozzarella cheese making kit! Yes, these were all gifts I requested. The blender I already knew how to use, but damn this one works better than my old Osterizer that would choke on just about anything more firm than a banana. I've been making the kids mango pineapple popsicles that are a breeze to whip up with this thing (take frozen mango, frozen pineapple, add a little juice of your choice and then blend 'till slushy. Pour in popsicle molds and freeze.)

When it came to the Easysprout, the name really says it all. Take 1.5 T of which ever seed mix you want (the sprouter came with these packets of seeds bought from the Sproutpeople) and put them in the container. 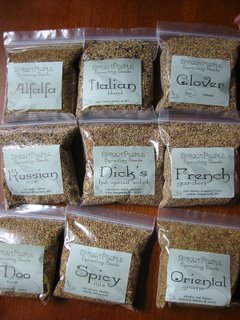 Rinse and drain the seeds every day and Ta da! on day 5 you have a container that looks like this. 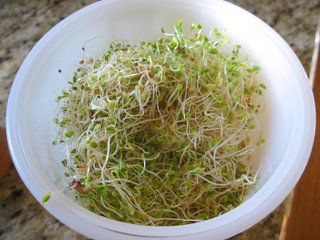 Which means that you can have my favorite breakfast which looks like this: 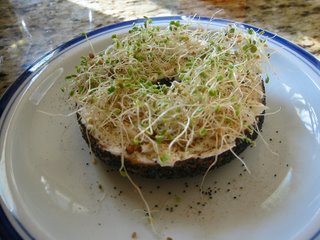 That's a bagel, cream cheese, cayenne pepper, black pepper and spicy sprouts. Best washed down with strong black coffee.
I know, you can use a mason jar and damp paper towels to sprout seeds, but this system is so much less messy and has better air circulation. For ease of use, it is worth it.

Not everyone is as fond of sprouts as I am. I figure it is the residue of being raised in Ann Arbor back when the hippie culture was still pretty prominent (anyone else out there have fond memories of the Sun Bakery? Sigh.) Sort of like gefilte fish, you may need to be weaned on it to truly enjoy it. I love sprouts and it is really hard to find decent, fresh sprouts even at the natural food stores. And if you find them before they are slimy or dried out, they usually cost somewhere in the realm of $3.50 per container.

So my sprouting technique is just fine.

I can't say the same for my cheese making skills.

I attempted my first batch of fresh mozzarella on Sunday and the result was eeeeeeh. I read the instructions, but didn't watch the video that is available on the web site (next time, I'll follow those instructions rather than the pretty lousy written ones that came with the kit). Mine didn't take 30 minutes, more like 120 minutes.

I started with the milk, citric acid and rennet: 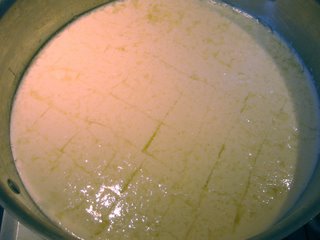 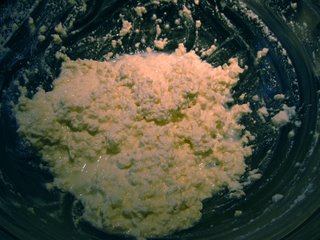 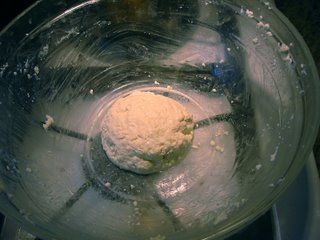 then added some salt and kneaded the ball (which hurt--the curds have to get to at least 135 degrees in order to stretch and that temperature is not comfortable for hand immersion.)

Finally, after much sweat (literally), I had this small ball of cheese floating in water: 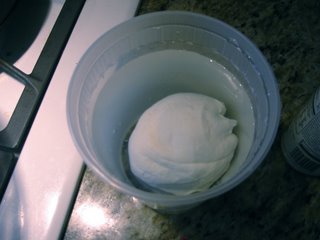 It looked the way fresh mozzarella is supposed to look, but when we cut into it to taste, it did not taste like the lovely creamy stuff I've bought on Saturdays at Morgan and York. Instead, it tasted a lot like raw bread dough... It was ok for putting on grilled pizza, but really nothing to write home about (or to justify the effort). 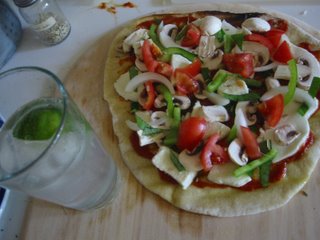 After two hours of kneading hot cheese curds, I needed a gin and tonic in a pint glass...

I need to work on my mozzarella technique. Luckily the kit makes up to thirty batches of the stuff, so hopefully sometime before batch 30 I will get the hang of it.
Posted by Kate at 5:05 PM

I'm intrigued by the Easysprout - I also remember the Sprout Years. Lately, we've been searching (unsuccessfully) for mung bean sprouts because after we found the children's book Bee-bim bop! by Linda Sue Park at the library, we've been making bi bim bop every week. Very yummy, but would be better with mung bean sprouts. Where do you get sprouting seeds in town? The co-op, I suppose.

Happy Belated Birthday Kate! What amazingly thoughtful and fun gifts... I am particularly impressed that you tried to make your own moz. cheese. That just sounds so time intensive, but probably a lot of fun. I hope you have more luck the second time around!

To deb, I think you can get sprouting seeds at Downtown Home & Garden (that's where we got them back when I was actively using my sprouter). Might also check Arbor Farms.