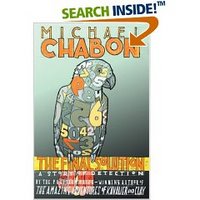 We just got back from a week of canoeing and camping at Isle Royale and while up there in the boonies, I read a lovely, delicate little book, The Final Solution: A Story of Detection, by Michael Chabon.

The book is only about 130 pages long (and was published in the Paris Review before coming out as a book) but Chabon reveals characters in the most minimal and effective fashion. What comes to mind is a watercolor with just a few brushstrokes capturing an image so effectively, yet in this case it is Chabon using just the right sentence to capture a character.

The plot isn't really significant (set in WWII, a mute boy, a parrot who squawks numbers that may be German codes or something else, an old detective who, though never named, is clearly a retired Sherlock Holmes) though the story is fine. This time it was the beautifully crafted writing that kept me entranced.

I've read and enjoyed a number of Chabon's books (The Amazing Adventures of Kavalier and Clay, Summerland, Wonder Boys, Mysteries of Pittsburgh) and there are small things in this book that are similar, most of all the underlying good humor and tolerance of human frailty. But when I think of the chunk of a book that is Wonder Boys (a good chunk mind you, one of those stories that you are glad goes on and on and on) and compare it to the style of this book I am blown away by Chabon's versatility. Also, this one is set in England and his British-isms are "spot on." Brian read the book after me and thought the author was English.

My favorite part of the book was chapter 10 which was told from the point of view of the parrot, Bruno. This might seem silly in some author's hands, but it was rendered so beautifully that I have gone back and re-read it three times already. Here's a sample to tempt you:

"The alphabet song swelled and billowed, distending Bruno's breast. As was true with all of his kind there was a raw place somewhere, inside him, that singing pressed against in a way that felt very good. If he sang the alphabet song for the man, the rawness would diminish. If he sang the train song, which had lingered far longer and more vividly in his mind than any of the thousand other songs he could sing, for reasons unclear even to him but having to do with sadness, with the sadness of his captivity, of his wanderings, of his finding the boy, of the rolling trains, of the boy's mama and papa and the mad silence that had come over the boy when he was banished from them, then the rawness would be soothed. It was bliss to sing the train song."

The only bummer with bringing this book was that I finished it in a day or two and was left with 4 more days in the woods to fill without sufficient fiction. Aaaagh! How could I make such an error! I foolishly thought that because we were camping and canoeing with the kids I wouldn't have much time to read, but I forgot that I routinely get up at least an hour before anyone else in my family and fire up the camp stove to make coffee and read.

So I re-read this book, then moved on to a book Brian bought for the kids, a mediocre sort of Laura Ingalls Wilder story set on Isle Royale called Charlotte Avery on Isle Royale. I started getting pretty itchy and restless without fiction and was reading and trying to memorize the tree and wildflower and bird guides we brought. But like Bruno's raw place that singing fills, I have a raw place that needs constant applications of fiction otherwise the pain of boredom becomes quite acute. I think it is a need for regular escape from reality; no matter how pleasant my reality may be (and it was pretty damn beautiful up there) I still need a break from it and without fiction, I feel trapped in reality and start pacing my cage.

I reached my limit the day before we were scheduled to leave and arranged for our paddle that day to take us back to the relative civilization of Snug Harbor where the Lodge is located (and I wanted to reward the kids for good behavior with a popsicle) and found a book on their shelves of lendables to tide me over. I got lucky. Most of the books on the shelf were pretty trashy, but hidden among them was a lovely Clyde Edgerton novel, Lunch at the Piccadilly. 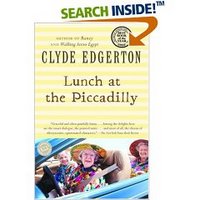 I really enjoyed his novel, The Floatplane Notebooks which I read a number of years ago, but hadn't read anything else of his since then. The jacket blurb on Lunch at the Piccadilly was horrible and made it sound cute and saccharine and Driving Miss Daisy-like. But thankfully it was none of those things. Instead it was another book full of sympathy for human flaws, a kind book with kind people who aren't simplified merely because they aren't bad. The book is set in North Carolina and while some of the characters have their eccentricities, they never deteriorate into the Fanny Flagg territory of becoming cliche.