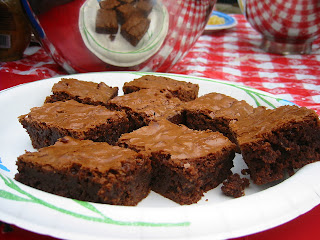 The real name of this recipe is "Supernatural Brownies", which is probably a better description since I think they are the best brownies I have ever made. But I just made them with the food-adverse 6 year old who read the recipe to me (and was made to measure the pan and figure out the measurements for the ingredients) and he pronounced it "Easy Peasy".

You can tell that I'm desperate to get this kid interested in making food--even totally unhealthy food like brownies made with two sticks of butter and two cups of sugar--in the hopes that a) maybe he'll get interested in eating some foods he has helped make and b) maybe he won't grow up to be a total incompetent in the kitchen. (Yea, yea, he's only six and there is plenty of time before he gets his first apartment and resorts to Ramen soup...) The recipe is so damn simple that I did have to come up with some added challenges to keep him interested--how many 1/4 cups of sugar are there in 2 cups? How many different ways could you measure out 1 cup of flour? (We went down to tablespoons with 16 tablespoons per cup; next time I lure him into the kitchen we'll go down to teaspoons with 3 teaspoons per tablespoon which leads to...um...hold on a minute....ah ha! 48 teaspoons per cup. Yes, my kid prefers math to food.)

Perhaps you are asking yourself, "Who really needs another brownie recipe?" I've already posted the recipe for Zingerman's Magic Brownies, which are a pretty good brownie, mind you. But I prefer these. They are a bit less sturdy than the Zingerman's brownies (due to less flour), a bit more fudgy, and the brown sugar in this recipe gives them a remarkable depth of flavor. The Zingerman's brownies are probably better for cutting into individual squares (or bricks if you go by Zingerman's idea of an ideal portion size) and wrapping for distribution. These guys might not stand up to that kind of treatment, but if you are bringing a plateful somewhere (like, say, to the couch with the entire season 2.5 of the new Battlestar Galactica DVDs to watch in one sitting) and don't have to worry about transport, make these. 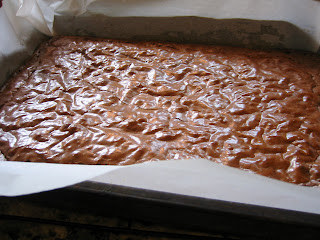 Supernatural (or "Easy Peasy") Brownies
from the New York Times food section which adapted it from Chocolate: From Simple Cookies to Extravagant Showstoppers by Nick Malgieri

1. Spray a 9 x 13 inch baking pan and line with parchment paper (give that a quick spray with the non-stick too). Preheat oven to 350 degrees. In top of a double boiler set over barely simmering water melt butter and chocolate together. Cool slightly. In a large bowl or mixer, whisk eggs. Whisk in salt, sugars and vanilla.

2. Whisk in chocolate mixture. Fold in flour just until combined. If using chopped walnuts, stir them in. Pour batter into prepared pan. If using walnut halves, arrange them on top of batter. Bake for 35-40 minutes or until shiny and beginning to crack on top. Cool in pan on rack.

Oooo, we absolutely love Battlestar Galactica (and brownies). Must add to Netflix queue. I can't remember which season we're up to; perhaps it's 2.5, according to their bizarre numbering system.
Starbuck out!