Attempting to be Lea

My challenge last week was to emulate a friend of mine, Lea, and to try and make some of the recipes that she has raved about. I managed to complete three, Daube Provencal, Mushroom Lasagne and Magic Brownies. Unfortunately I was unable to create these dishes while maintaining my composure, the way Lea always seems to do. But the food was pretty good!

The Daube Provencal (from Cook's Illustrated)was a high falutin' beef stew. I liked it--very rich with olives, wine and anchovies boosting up the flavor of the sauce. 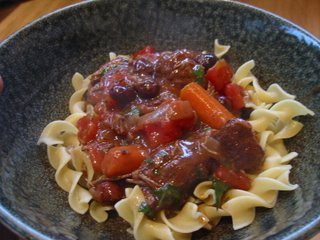 But I don't think I'm that much of a beef stew kinda person. Nothing wrong with it, but Brian and I didn't gobble up the leftovers and, sadly, the kids wouldn't eat the stew at all.

A few days later, I made the Zingerman's Magic Brownies (recipe below). Lea found the recipe in a copy of Midwest Living, a magazine she decided to subscribe to shortly after moving here from California. (The magazine also included helpful information for transplants like the definition of Vernors). I don't think the rest of the magazine impressed her much, but we figure the entire year's subscription was worth it for this recipe. 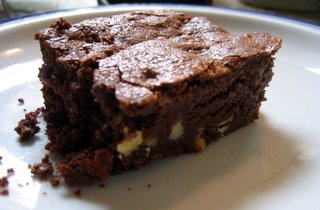 These are awesome brownies. I've been making a pretty decent brownie recipe from one of the NY Times Minimalist columns, but these beauties are fudgier, deeper and darker. With 6.5 oz of unsweetened chocolate and 13 T of butter in the recipe, they damn well should be richer!

The Mushroom Lasagne was fantastic (recipe below).
Question: How much lasagne (in a 9 x 13 inch pan) can two people eat at one sitting? 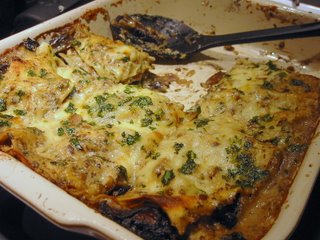 Answer: A whole lot.
Brian and I were in Happy Tummy land on Friday. There are three different types of mushrooms in this lasagne: roasted portobellos, minced button mushrooms and dried porcinis. One of the best features was the final touch--after the lasagne comes out of the oven you sprinkle on top a small amount of a mixture of lemon zest, raw garlic, parsley and basil. These fresh flavors balance the richness of the lasagne base and give it that final burst of bright flavor.

This stuff even re-heated well, which was surprising as it has a bechemel (not tomato) base which can often become greasy and separated when reheated.

After my week of trying to be Lea (and me with only two regularly-rude kids to her three well-behaved ones) I'm a little tired; God only knows how she does it--sorcery? a build up of good karma from past lives?

We'll be having re-heated frozen Ikea meatballs with ligonberry sauce for dinner tonight.

2. In a heavy small saucepan, heat the butter and chocolate over low heat, stirring, till chocolate is melted and smooth; set aside to cool.

3. In a small bowl sift together flour, baking powder and salt.

4. In a large mixing bowl, beat eggs and sugar with an electric mixer on high speed for 5 minutes or till light yellow and fluffy, scraping side of the bowl occasionally.

6. Spread batter in pan. Bake 30 minutes or until brownies appear set. Cool in pan on wire rack; cut into bars.

1. Cover porcinis with water in small microwave-safe bowl; cover with plastic wrap, cut several steam vents in plastic with paring knife, and microwave on high power for 30 seconds. Let stand until mushrooms soften, about 5 minutes. Lift mushrooms from liquid with fork and roughly chop (you should have about 3 tablespoons). Strain liquid through fine-mesh strainer lined with paper towel into medium bowl. Set mushrooms and liquid aside.

2. Adjust oven rack to middle position and heat oven to 425 degrees. Spread portobello mushrooms in even layer on rimmed baking sheet and drizzle with 2 tablespoons oil, tossing to coat mushrooms evenly; sprinkle with 1/2 teaspoon salt and 1/2 teaspoon pepper and toss again. Roast mushrooms until shriveled and all liquid released from mushrooms has evaporated, about 30 minutes, stirring halfway through cooking time. Set mushrooms aside to cool.

3. While portobellos roast, heat 1 tablespoon oil in 12-inch nonstick skillet over medium-high heat until shimmering. Add onions, 1/4 teaspoon salt, and 1/4 teaspoon pepper and cook, stirring occasionally, until onions are browned around edges, about 10 minutes. Transfer onions to large bowl and set aside.

6. Add butter and cook until melted. Add flour and cook, stirring constantly, about 1 minute. Slowly add reserved porcini soaking liquid, scraping pan bottom to loosen browned bits. Add milk and nutmeg. Increase heat to medium-high and bring mixture to boil. Reduce heat to medium-low and simmer until sauce has thickened and reached consistency of heavy cream, 10 to 15 minutes (you should have about 4 cups). Remove from heat and stir in 2 tablespoons parsley and 1/4 cup basil.

9. While lasagna is baking, combine remaining tablespoon parsley, tablespoon basil, and 1 teaspoon garlic with lemon zest in small bowl. Increase oven temperature to 500 degrees, remove foil from lasagna, and continue to bake until cheese on top becomes spotty brown, 6 to 8 minutes. Remove lasagna from oven and immediately sprinkle evenly with herb mixture.
Posted by Kate at 9:47 AM

Major seconding of the mushroom lasagne recipe. I made it this past week for the first time (after being a big fan of CI's Spinach Lasagne recipe which has many similarities), and loved it. I was worried about it being soupy/soggy due to the sauce being so copious, but those noodles must have sucked it all up. I think I cut my portobello caps too thinly though since half of mine burnt during the roasting portion! Definitely keep an eye on that part of the cooking. Mr Annex thought it was "too mushroomy", though "better than something made with cream of mushroom soup." Ya think?!!

I think you forgot to list how much sugar to use in the Zingerman's brownie recipe.

Thanks for the proofread! 2 C sugar. I corrected the recipe.

I googled this brownie recipe to see if anyone else made them. I love them( I made them with dulce de leche) and they're now my go to brownie recipe. I got one issue of midwest living and I agree, it was worth it just for this recipe.

Thank you for posting the brownie recipe! I'm obsessed with Zingerman's brownies, which is unfortunate, since I live in Los Angeles. Having the recipe is a dream come true!

Thanks for posting the zingerman's recipe, taste exactly like the real thing for a fraction of the price!