Brian's birthday was this past Saturday and one of my gifts to him was an all-beer dinner for us and a few friends (due to our dinky dining room, we couldn't make it a huge gathering). Every course was made with beer and there were a load and a half of beers for sampling and tasting. 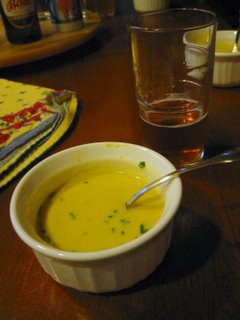 There's nothing fancy about the soup--a base of leeks, carrots, celery and garlic get sauteed in butter, then flour is sprinkled over and cooked briefly to form a roux, then you add milk, broth and ale. I veered away from the recipe and pureed the soup and then set it aside until shortly before serving it, when I added the sharp cheddar cheese. Rather than top it with bacon, I sprinkled on some chives and it was all set--velvety, rich, but with a nice bite from the beer.

The choucroute was hearty and went well with lots of different beers. I took an excursion to Hamtramck to get good sausages--knockwurst, bratwurst and kielbasa--and sauerkraut. 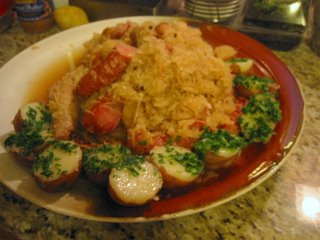 The brussels sprouts were decent, but a little bit weird--braised in beer with whole cumin seeds and a handful of fresh basil...two flavors that don't really go together. 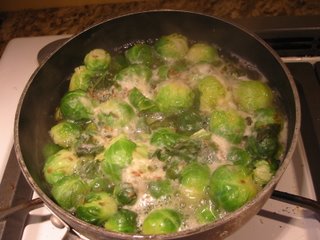 The basil was overpowered by the cumin and beer so it wasn't really noticeable. I wouldn't include it again. 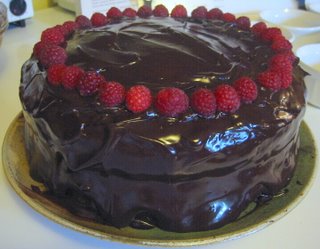 We might have all been a little too buzzed to be dissuaded by the sour aftertaste and dry-as-sawdust texture. Most of us choked some of it down by focusing on the fresh raspberries between the layers and on top, the raspberry ice cream that was on the side and full glasses of Lindemans Framboise Lambic.

The food, other than dessert, was good, but most of our attention was focused on the myriad of different beers to taste. There were some old favorites: Oberon, Bass Ale, and a couple of the Dexter-based Jolly Pumpkin Ales and then there were all the new beers to sample. We put out a lot of small glasses, set some of the beers on a lazy susan and then started tasting. 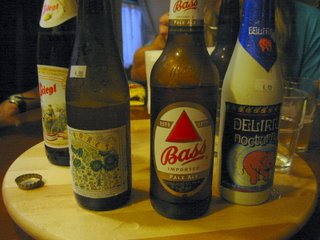 I have a new favorite wheat beer, Wittekirke: 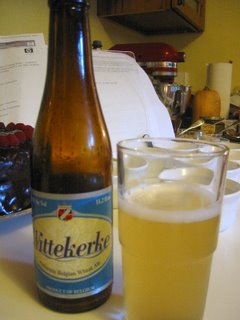 It has a honey aftertaste that manages to convey the essence of honey without the sweetness--very crisp.

When the party was over, Brian and I dumped the rest of the cake in the trash, packed up the left over sausages to freeze for a hearty dinner once the cold weather really kicks in and then gazed at the vast quantity of beer still sitting in our beer fridge...
Posted by Kate at 11:23 AM

Kate -
Sorry the beer cake didn't work out. Here's a recipe for Chocolate Stout Cake - it's a Bon Appétit recipe and always gets rave reviews from our friends. It's rich and moist - and the ganache has NO beer in it! I make a HALF recipe in two 9" pans. Try it next time you have a beer feast and tell me how you like it!

Hi..Wittekirke is my favorite beer as well. Try pouring some of that rasberry frambois in it. It's awesome!