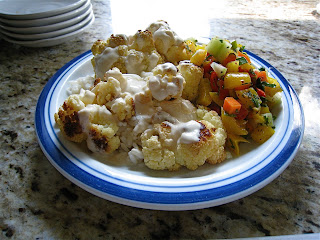 I think I might be kind of sick of humus. I used to eat it voraciously and while I appreciate its blood-sugar-level stabilizing effect, it has started tasting a little pasty to me. Or maybe I just ate too much not-so-good industrial humus rather than the stuff we get in Dearborn and have dubbed "white velvet." But even my homemade stuff hasn't pleased me of late.

But not to worry. I have something even simpler that I'm presently eating in great quantities: tahini lemon sauce (pictured above drizzled over roasted cauliflower and rice).

I think I need to keep a container of this tahini sauce around, sort of like the way I always have a jar of mayo in the fridge. It would be terrific tossed over some diced tomatoes, cucumbers and minced parsley and mint. It would taste mighty fine on a roast beef sandwich. If you happen to have some spare falafel or kofte around, serve them with this. It would probably be an awesome topping to a pile of sauteed tofu and asparagus. And you could dip carrots in it when feeling peckish (excuse me for a moment while I go get some carrots and the leftover tahini sauce. Ah. Now. That's better.)

The roast cauliflower with tahini sauce can be found in many Lebanese restaurants, though whenever I've ordered it the cauliflower has been deep fried (no batter--just golden brown all over). If deep frying doesn't seem like a pain in the butt to you, be my guest! But if you are somewhat fearful of boiling cauldrons of oil (like me!) the roasting route is far easier and does a pretty good job in sweetening up the cauliflower and tempering the strong cabbagey flavor that some people find off-putting. You probably already know that plain roast cauliflower is pretty terrific, but give the sauce a try and, like me, you might get hooked. As soon as the florettes come out of the oven, I'm snatching them off the roasting pan, dunking them in the sauce and risking burning my tongue--the combo is that good. If you don't like the white on white coloring, feel free to sprinkle with a little chopped parsley or mint and maybe a sprinkle of sumac or paprika for snazz.

Puree together in a blender. That's it!
Posted by Kate at 3:26 PM

I am trying to imagine what this would taste like and you know I can't but I have everything int he fridge right now so I think I am going to have to go do some experimenting. We love Hummus here and I made some yesterday with Hrissa in it WOW that was good too.

This looks really wonderful. I also love baba ghanouj when I'm sick of hummus. Have you tried Sahara Cafe on Zeeb near Kitchen Port - it's Lebanese heaven. Seriously.

I never never never get sick of hummus. I do vary what I might add to it, so maybe what I love with its garbanzos and tahini base is no longer "true" hummus. However, I can honestly say that I eat some form of homemade hummus nearly every day for lunch and now I am going to enjoy trying this sauce, too. I can taste it already! :-)

The lemon tahini on roasted cauliflower sounds great. When I get tired of hummus but still feel like beans I eat refried black beans with cumin and sour cream.

Try this hummus for a spicy change:

Whirl in the food processor until it reaches an acceptable creaminess. I promise it will not be bland.

Saul mixed up something based on this for the sesame noodles we had last night - he was experimenting as he went (the lazy dad lets his kids do final food prep) but it involved a sauce I had made of tahini + cider vinegar + lemon juice + orange juice, which he added imprecise quantities of sesame oil and soy sauce to.

The orange juice was a nice touch - added some sweetness and some body to the sauce but still kept the citrus theme. I'll experiment more.

Alright - I am embarrassed to say that I have not tried your lemon tahini recipe yet in spite of my earlier posting/comment. However, after re-reading your post for this recipe, I am going to do it !! using it after roasting my Tantre Farm green spiral cauliflower that I have been saving for a special meal where it can be a centerpiece instead of a side dish. Your peanut sauce recipe got me back here to remember this great sounding recipe, too! Thanks, Kate!