I sat down at the computer shortly after dropping the critters off at school and just about when I was opening the documents that house my novel I heard: BAM! BAM! BAM!

My office is about 10 feet from the street where they were DROPPING a huge METAL thingy to BREAK up the STREET surface. The impact was also rattling the glass in my windows, and, truth be told, rattling my brain.

So I closed the documents and decided that the city of Ann Arbor road crew was telling me not to write today. Not that I usually check with the road crews to decide whether it is a providential day for creative expression, but it was pretty clear that today wasn't.

But hey, it gave me an excuse to go to the Farmer's Market and there I discovered that it is the time of year when farmers pretty much pay you to take their tomatoes. I bought all these romas for slow roasting for $5: 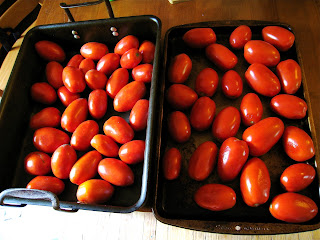 I've never made slow roasted tomatoes, but as it takes about 9 hours, I should have some for sampling shortly after I put the critters to bed. I'm thinking some tomatoes, a baguette, some shavings of Parmesan and a glass of wine will be my companions this evening (Brian is off on a work trip this week).
Posted by Kate at 8:44 AM

Sounds like a perfect dinner and respite. Darn those Ann Arbor road crews! ;-0

I've seen those machines on the freeway. I can't imagine having one down the street! Good deal on the tomatoes though. I still have to get around to drying some before they are all gone.