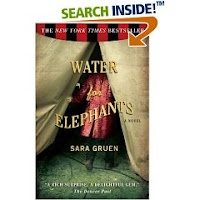 I know it is a little strange to read fiction about the circus life back to back, but that's what I did. While I haven't done an exhaustive search, I don't think the circus is the most popular topic in contemporary fiction. The first book was one that my book group chose, Water for Elephants and the second book was one that an anonymous commenter recommended back when I was asking for books of linked stories (thanks anonymous!), The Circus in Winter. 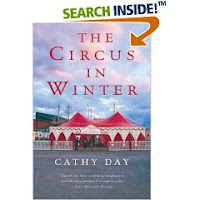 My book group met last night (food post to follow) and I was definitely in the minority in not liking Water for Elephants. I admit that after the last book our group attempted (an apt verb since no one actually finished the book), Snow by Orhan Pamuk, I was relieved when I started Water for Elephants. Hey, there were characters! And a plot! And prose that didn't make me feel numb! But that relief soon wore off as I started to get more and more annoyed with the characters, the melodrama, the predictability of it all. So last night grouchy-Kate, the buzz killer (though Diane's spiked lemonade soon brought the buzz back!), bitched about the book while everyone else recounted their favorite parts.

I don't really want to spend the energy here recounting my objections; I'd rather turn your attention to a vastly superior (in my grouchy-Kate opinion) piece of fiction that happens to be about a circus. When I first started Cathy Day's book, I was worried that it would just be a bunch of stories behind the side-show freaks. There were a few of these, but the chapters/stories built on each other to present a portrait of a performing culture that had depth and emotion. Set in the circus' winter quarters in Lima, Indiana, it is also a view of a small town that just happens to have a large portion of the population who talk about elephants rather than their pet dogs. That is to say, the exotic is not the attraction, rather the humanity underneath the "sawdust and spangles."

Many of the chapters were published as short stories before being drawn together in this book and I can certainly see how they can stand on their own. But when read together they gain power from each other and turn into a novel. I'm really impressed by this fact--that a writer can take the fragments, which are fine on their own, and stitch them together into something that becomes whole. It is a beautiful and memorable book. 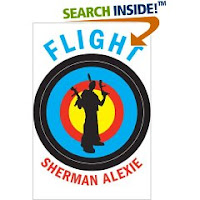 The next book our group will read is a book I'm really excited about: Sherman Alexie's Flight. I've read a few of Alexie's short stories and loved them--aggressive, shocking prose, but also funny and beautiful. He has a really unique voice. Here's a little excerpt taken from the Amazon review to tempt you to read it too:

Zits [the main character] meditates on the nature of profanity, deciding even a harmless word can be profane when delivered with punch:

Of course, I keep staring at him.

'Stop staring at me,' he says.

Jesus, I sound like a pissed-off Dr. Seuss character. That thought makes me laugh.

'Are you laughing at me?' he asks.

'You bet your plopping ass I'm laughing at you.'

You bet your plopping ass I'll be reading this as soon as it comes in the mail.

Hi! I found your blog looking for a recipe for zingermans brownies (thank you!) Your food and book club sounds really fun. Not to be a stalker or anything, but I live in the area and am curious how one locates and joins a bookclub such as yours. Any advice would be helpful. I love to read and cook and eat too! Thanks for the great recipes. - kelly

Scott recomends 'the book of lost things' by john connelly...seeing as he likes the books you like...I'm suggesting the circus in winter to hm