Wow do I ever regret waiting so darn long to try making pizza on the grill. I made it on Tuesday night and it was terrific and best of all, not too damn fussy.

I mentioned a long time ago that I have never made a successful calzone at home--the fillings always sogged out the crust no matter what changes I made, and the crust wasn't exactly delectable itself, being sort of shoe-leathery in texture. So I had pretty low cooking confidence going into this little recipe attempt. But it was stinking hot so I wasn't going to turn the oven on and I had some of that left-over fresh mozzarella that really needed to be used.

I looked up Grilled Pizza in the Cook's Illustrated on-line edition (which I pay an additional $19.95 for in addition to the $25 print subscription price and which still bugs me despite its proven use value) and followed their general instructions for making it on a gas grill. It's a long damn recipe and I'm happy to say that making it isn't as complicated as it first looked.

I made the dough recipe which turned out to be really good thanks to that miracle ingredient--Salt! It called for 1.25 t salt and I added a little more (1.5 t) which made a big difference in the flavor of the dough. There is also quite a lot of olive oil in the dough--2 T. They say that this oil content keeps the dough from sticking to the grill and it seemed to work.

Cook's didn't say to flip the crust, but I did because I hate the taste of raw dough so I briefly cooked the other side of the crust before adding toppings.

I didn't go for the toppings they suggested--fontina cheese, diced plum tomatoes, parmesan, spicy garlic oil and fresh basil--but instead used what I had in the house. My pizza was first brushed with regular garlic oil (one pressed clove warmed up in about 1/2 C olive oil), then layered with lots of fresh basil, then a layer of plum tomato slices that had been tossed with a little salt, then slices of Big 10s fabulous fresh mozzarella, then a little more of the garlic oil brushed on top and a sprinkling of kosher salt and some ground pepper.

This is what it looked like right before it went on the grill for the second time (the crust has already been cooked so it doesn't stay on very long--just enough to melt the cheese and warm up the whole concoction). 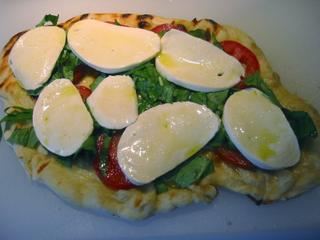 And here is what they looked like moments before we started shoveling them down. 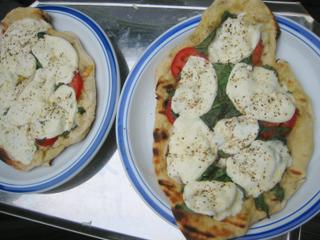 The crust was a little smoky from the grill, crisp, salty and it held together well to deliver the toppings. And really, what can go wrong with tomatoes, basil and mozzarella? I drizzled a little of the Big 10 18-year balsamic vinegar on mine and it gave it a little extra zing.

Now that I have discovered how good and not too labor intensive these are I am kicking myself for not planting any Italian style tomatoes in my garden. I'll probably try these pizzas with some of my beefsteaks or green zebras once the bounty really starts to kick in, but I suspect they will be too wet to really work well.

Combine oil and water in liquid measuring cup. In food processor fitted with metal blade, process bread flour, whole wheat flour, sugar, salt, and yeast until combined, about 5 seconds. With machine running, slowly add liquid through feed tube; continue to process until dough forms tacky, elastic ball that clears sides of workbowl, about 1 1/2 minutes. If dough ball does not form, add more flour 1 tablespoon at a time and process until dough ball forms. Spray medium bowl lightly with nonstick cooking spray or rub lightly with oil. Transfer dough to bowl and press down to flatten surface; cover tightly with plastic wrap and set in draft-free spot until doubled in volume, 1 1/2 to 2 hours.

When dough has doubled, press down gently to deflate; turn dough out onto work surface and divide into 4 equal-sized pieces. Set dough balls on well-floured work surface. Press dough rounds with hand to flatten; then use a floured rolling pin to get it approximately into a circle (remember it is supposed to look kind of rustic--ain't it great when you can pass off sloppiness for rustic authenticity?). Stack the dough rounds each on a sheet of parchment paper.

Lightly flour a pizza peel (or use a sideless baking sheet); invert 1 dough round onto peel, gently stretching it as needed to retain shape (do not stretch dough too thin; thin spots will burn quickly). Peel off and discard parchment; carefully slide round onto hot side of grill. Immediately repeat with another dough round. Cook (with grill lid down) until tops are covered with bubbles and bottoms are grill marked and charred in spots, 2 to 3 minutes; then flip and grill otherside 1-2 minutes till the whole thing doesn't look raw anymore. While rounds cook, check undersides and slide to a cool area of grill if browning too quickly (you can do this with one side of the gas grill lit and one side un-lit but that means you can only do one round of dough at a time). Transfer crusts to cutting board with the more cooked side up. Repeat with 2 remaining dough rounds.

Brush crusts with Garlic Oil; top each with one-quarter of the basil, one-quarter of the sliced tomatoes and enough cheese slices to cover (don't overlap cheese or it will take too long to melt). Brush mozzarella with a little more garlic oil then sprinkle with a little kosher salt and pepper. Return pizzas to grill and cover grill with lid; cook until bottoms are well browned and cheese is melted, 3 to 5 minutes, checking bottoms frequently to prevent burning. (again, if the bottoms brown too fast you can always do the indirect heat thing with one grill lit and the pizza over the unlit side until the toppings have melted). Transfer pizzas to cutting board (tongs worked great); repeat with remaining 2 crusts. Cut into wedges and serve immediately. Offer a little balsamic if folks want to sprinkle a little on.