On Friday evening we had some folks over to sample chef Brian Polcyn's sausage making skill. (Polcyn is the chef and owner of the restaurant that I went to on my birthday in June--The Five Lakes Grill. If you missed my blow by blow recounting of that fabulous meal, you can look here.)

The restaurant's web site reports that they sell their house made sausages every Thursday for $7/lb. So on Thursday evening we went up to make our purchase. One word of advice--make sure you call ahead and ask to talk to someone in the kitchen about the sausages they have for retail. We did and even then it wasn't the smoothest transaction--I don't think very many people take them up on this sausage purchase idea because much of the staff seemed completely clueless when I showed up (I went in the back entrance--there is lots of parking behind the restaurant and I was looking pretty crappy and sweaty after a day with the entropy kids, so I didn't want to ruin any patron's dinner who might be unlucky enough to find themselves down wind from me...). It took at least 20 minutes to find the guy I had talked to on the phone, tell him what I wanted and receive the nicely wrapped meaty treasure. And then they had to find someone else for me to pay. Anyway, point being, bring your patience to the restaurant when you go to make your purchase.

Thankfully, the wait is well worth it.

There were three varieties available on Thursday and they were $6.25/lb rather than the $7 listed on the web site (no complaint there!). I bought about 2 lbs of Chicken Sundried Tomato sausages and 1 lb each of a Veal Hunters Sausage and a Veal Tuscan Sausage. The chicken sausages were raw, the veal sausages were fully cooked (though they did need some time on the grill to make them ready for eating).

Here are the chicken sausages posing on the grill (with a few Koegel's hot dogs for the kids): 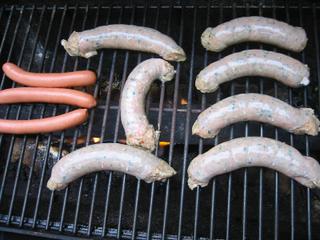 And here is a little lump of chicken sausage ready for its close up: 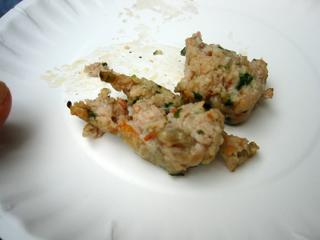 Here are the veal offerings (Hunters on top, Tuscan on bottom): 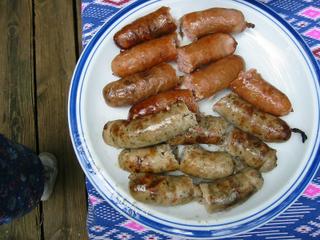 And this is what my greedy-guts plate looked like: 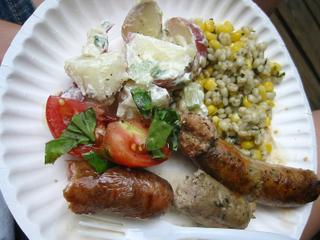 The snaussages with their side dishes: Sarah's home grown tomatoes, basic red skin potato salad, and MJ's corn and barley salad.
And the tasting report? My favorite were the Chicken Sundried Tomato--a wonderful spice balance and nice and juicy. Second favorite was the Veal Tuscan--it was drier than the chicken (probably due to being precooked and just finished on the grill) and much richer, almost too rich for my taste. Again, a nice spice balance. Third place was the Veal Hunters--this is a smoked sausage and it was just too intense for me. I like smoked food a lot, but I had a hard time tasting any other flavor the smoke was so intense. And again, too rich for me. I think it would probably make a great ingredient when combined with other foods, but I probably wouldn't make it on its own again.

For desert we dished up a bit of the chocolate orange sorbet and made it a complete Bittman desert by serving it with his basic brownie recipe which is super fudgy and rich (and not for folks who want their brownies big and cakey). I promise a full brownie blog with the recipe soon. 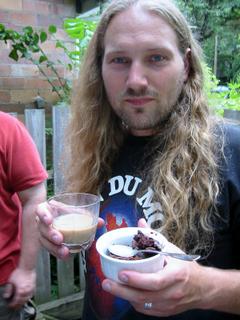 Brian is still in Lebowski fest mode and mixed up White Russians (aka Caucasians) for anyone who wanted one as a dessert beverage.

Now I need to get my butt in gear and drive out to Saline for an Indian cooking class my friend John helped organize. Not to worry, a report will be coming soon.
Posted by Kate at 7:14 AM

Wow. Next time you do the sausage run, can I tag along?