The other day I opened my spice cabinet and was beaned on the head by a falling jar of allspice. It fell not because it was a malevolent spice, but because there were so many crammed in jars of various herbs and spices that the poor thing had no recourse but to hit me to get my attention and try to convince me to improve its living standards. Clearly, I am really not the person to turn to when it comes to organization, but I did learn and implement something at the cooking class on Sunday.

Bhanu brought out this container of neatly labeled spices for us to use that day. 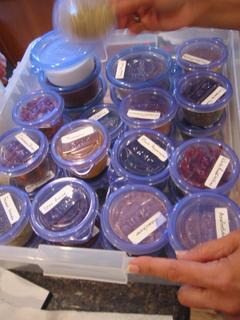 I asked her if she had set it up this way because she was traveling (she lives in San Francisco and was visiting her son) and she said that she has a bin just like this one at home (but with a few more spices).

It was so incredibly easy to use these spices--the little gladware containers were much easier to use than screwing and unscrewing endless jars and a tablespoon fit in easily. But best of all, once the lid is on the spice bin, you can shove it someplace out of the way, like on a bookshelf or under the sofa or maybe even in your kitchen if you don't clog up all your cabinet space with appliances like I do...I rarely need regular access to fenugreek seeds except when cooking Indian food so when I got myself organized I excavated many jars from the spice cabinet (giving that desperate allspice a little room to stretch itself out), decanted them into little gladware containers, labeled them and popped them in the bin. Pretty much everything dried that I need to cook Indian recipes is now collected all together and also out of the way of the daily use stuff.

The kids will be sooooo happy tomorrow when I can actually find the cinnamon for their oatmeal without cursing up a storm.

So maybe I should take a lesson from this and try to organize all the hostile piles of paper that cover pretty much every horizontal surface in my house. But unfortunately there isn't any big reward to organizing paper--oh great I found 122 paid bills that should have been filed somewhere! Maybe I could synthesize some sort of reward for doing it, even if it was an unrelated reward. If I clean off one of the crapoires (a term lifted from Lynne for their armoire where they dump crap, though she only has one crapoire and in my house there are numerous crapoires to the point of almost calling the place a crapoireteria) then maybe I can try my hand at making vanilla gelato because I have a hankering for an affogato al caffe which is simply vanilla ice cream or gelato "drowned" in a couple of shots of espresso. (I looked for a photo on Flickr and amazingly there is no affogato tag! If I make one, I must photograph it and post it there...)

Or if I'm tired after organizing all that dreary dusty paper, maybe I'll just buy some vanilla ice cream and give my donkey brain its carrot without making the donkey grow the carrot from a damn seed.
Posted by Kate at 8:08 PM

I feel as if I live in a crapoireteria, too. In fact, my mother-in-law likes to remind me that one of Elliot's first words was "mess". Most of my crap is also of the paper variety: please post more organizational (and motivational) tips as you find them!

Just discovered your blog, by the way, and I'm really enjoying it. Great writing, and a wonderful mix of subjects.