I present to you what piggy Kate ate for breakfast this morning: 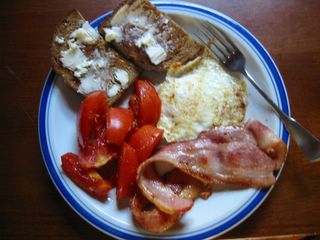 A big old plate of fat-loaded food!
In my defense, I didn't fry the bread in bacon fat (but instead smeared it with an obscene amount of butter...hmmm, maybe not such a good defense after all...), though the egg and tomato (homegrown!) were fried up in the same pan as the luscious thick cut bacon.

I craved this fat-fest of a breakfast because I have actually soldiered on and am reading the non-fiction London: 1945 despite my previous griping. I confess that I skimmed over the chapter on the Ministries--the author is trying hard to get you interested in the war-time bureaucracy, but it isn't thrilling reading. Once I got to the chapter on war-time food and rationing, though, I was hooked! Today's breakfast is an homage to all the Brits who had to deal with rationing until--get this--1951! That's right, you may have thought that the food situation would improve in 1945 after the liberation of Europe, but the rationing was worse than any prior year and it continued longer than anyone imagined. So this breakfast would have made many a Brit swoon with pleasure. And it did a pretty good job on gluttonous old me.

The biggest surprise is that I didn't get this bacon at Big 10 (Applewood Smoked Bacon = $14.99/lb) but at Meijers! It is the Meijers brand thick cut bacon and was dirt cheap and incredibly meaty. Ok, so it didn't quite have the depth of flavor the Applewood stuff, but for the money, pretty damn good.

On the knitting front, I have new inspiration for knitted toys. Jess Hutch has posted photos of her knitted robots on Flickr: This one is out for a stroll.
Fiona's current favorite book is this one, Hello Robots. 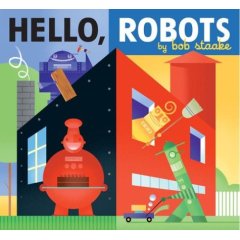 I have to read it about 4 times each night.
We recently acquired a robot like this: You wind him up and he walks forward with sparks shooting out of his eyes. You'd think this might cause nightmares among the two-year-old set, but Fiona just lets out squeals of glee. Fiona and I also went to see the wonderful Robots Like Us exhibit at the Museum of Science and Industry when we were passing through Chicago.
So I'm hoping I can dig among the stash yarn and find appropriate weights and colors to make Fiona a softie robot of her very own. I like how serious Jess Hutch's robot looks, but since our favorite line from the Hello Robots story is "Hello Robots, happy robots, smiling bolt to bolt" the one I make should have a big smile on its face and I will probably need to figure out how to make a knitted bolt--bobble? little knot? a stitch or two of contrast color? Suggestions welcome.
Posted by Kate at 9:07 AM

Since we issued the fatwa a year ago banning cereal in our house, and since Iris has recently taken a great interest in bacon, most of our daily breakfasts don't look too dissimilar to this one. Except for the tomatoes,