It is peach season in Michigan which is cause for much rejoicing. Yesterday I obtained some Red Haven peaches from the Produce Station and combined them with lemon ice cream I made earlier in the week for a perfect summer dessert: 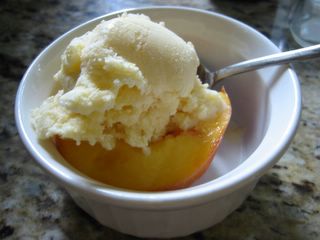 The peach was ripe enough that it could be cut with the spoon and a half a peach is a nice size for some ice cream, not so much as to make you feel overly full in the heat, but enough to feel like you have had a good treat. The flavor of the peach was intensely perfumed and the sharpness of the lemon enhanced it well.

The lemon ice cream is a recipe I modified from one found on the web and, I have learned, is not terribly kid-friendly. I served some to Ian and after about 5 minutes of him trying to separate the zest from the ice cream base he gave up and deserted his bowl (more for me!) It has a lot of lemon zest in it and I cut down the sugar in the recipe so it isn't too sweet. I suppose if you were a nicer mom, you could strain the custard after it has steeped and before freezing to get the zest out.

Prep:
Use a Microplane grater and zest the 6 lemons into a bowl (this is the kind of Microplane grater I have--it is one of my favorite kitchen tools both for zest and grating Parmesan. If you are clumsy like me, you will want the one with a handle...). Mix the sugar into the bowl with the zest. Squeeze 3/4 C of juice from the lemons and set it aside.

Cooking:
Whisk the egg yolks with the cream and salt in a heatproof mixing bowl. Put the evaporated milk and lemon-sugar mixture in a medium non-aluminum saucepan. Bring the liquid to a simmer, stirring to dissolve the sugar. Remove pan from heat. Slowly whisk the hot milk into the egg yolk mixture. Then return the combined stuff to the saucepan. Stir constantly over medium-low heat until the mixture begins to thicken slightly and coats the back of a spoon, about 5 minutes. Pour the hot custard into a bowl without straining (unless you are the nice mom who makes this for her kids). Stir in the vanilla. Put a sheet of plastic wrap directly on the surface of the custard to prevent skin from forming. Chill custard--can be refrigerated for up to 48 hours.

Freezing:
Stir the lemon juice into the cooled custard and transfer mixture to an ice cream maker and freeze. Makes about 1.5 quarts.

My sister is arriving for a visit tomorrow and since she has a sweet tooth of epic proportions, I feel pretty sure this week will be one of many desserts. Despite the number of postings I have about dessert, I actually have a salt tooth--I definitely appreciate a small amount of an intense dessert and I think making dessert is super fun cooking, but I can't say I really crave them. When I go to a nice restaurant I'd much rather have a good appetizer and skip dessert than the other way around.
Posted by Kate at 7:04 AM

Give her my regards!