Saturday was my birthday and in celebration Brian took me out to a restaurant that I've been wanting to try for ages: the Five Lakes Grill in Milford. I'd heard it was one of the best restaurants between Toronto and Chicago. The owner and chef, Brian Polcyn, was featured in Michael Ruhlman's book, The Soul of a Chef: The Journey Toward Perfection.

I'll cut to the chase--we had a fantastic dinner. If you want to look at the current menu, it is posted on their site. I took photos, of course (without flash, forgive the grainy quality).

We started with the Farmer's charcuterie plate--Polcyn is known for his house-cured charcuterie and for a good reason. 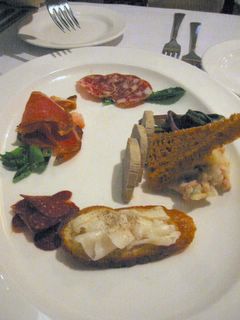 Clockwise from top: a soppresatta-style salami, liver pate with pickled ramps and a ham-studded potato salad, crouton with lardo, a smoked dry salami, and Westphalian ham with baby basil leaves.
A more affordable way to sample his sausage making talent (which I plan to avail myself of) is the purchase of his wonderful fresh sausages to take home--they have two varieties available every Thursday at $7 per pound. Brian works in Milford so some Thursday this summer he will be sent with a sausage request and we'll have a big barbecue with friends.
After the charcuterie, Brian had a potato soup with carmelized onions and frizzled leeks. It sounded basic on the menu but what was delivered to our table was the silky smoothest potato soup I've ever tasted. Not a hint of the grainy quality that can sometimes afflict potato soup. 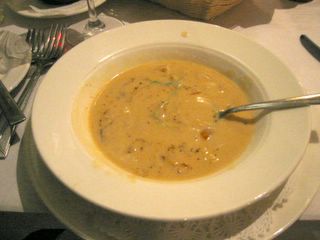 I call it, Bliss in a Bowl
Then we had our salad courses. Brian had a traditional caprese salad of tomatoes, fresh mozzarella and basil. It was pretty and tasted fine, but was the only thing we had that didn't blow me away. 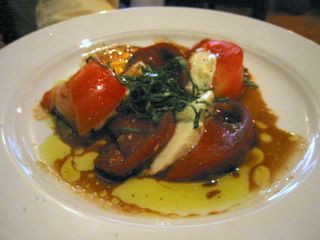 I had the utterly retro wedge of lettuce with house-made Roquefort dressing, cherry tomatoes and hard boiled egg. I know, it doesn't sound like gourmet fare, but it was fabulous. And anyone who has been back-country camping with me knows that one of my favorite "junk foods" to eat when I get back to civilization is a large quantity of iceberg lettuce with blue cheese dressing. This convinced me that I need to make my own blue-cheese dressing more often--it's ridiculously easy, just requires making the effort. 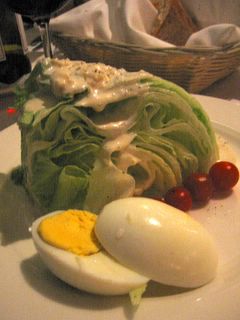 Then came the entrees. Here is what I had: 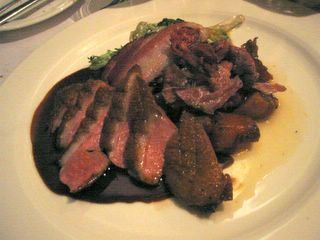 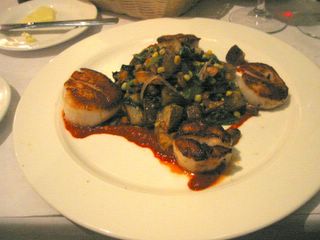 with a saute of Chanterelle mushrooms, corn, and spinach with a roasted red pepper sauce
Both entrees were fabulous. My duck was rare and sweet and the smoky confit and bitter frisse set it off well. It was insanely rich, which I suppose is to be expected with duck since it is so fatty (and fatty in a good way). Brian's scallops were a special of the evening, our server said they have a scallop special most weekends. The scallops were huge (Brian described them as burger-sized to give you a better idea). I got a bite of scallop with a piece of chanterelle and it was such a fabulous combination--the musty richness of the fungus set off scallops sweet, pure flavor. The only thing we thought was superfluous was the roasted red pepper puree--it looked pretty, but didn't add much or meld with the other flavors.
I know some people will be shocked, but we didn't have dessert. None of the desserts sounded particularly interesting to me--just sort of standard (a molten chocolate cake, a lemon tart with raspberries, homemade vanilla ice cream, a creme brulee and a cheesecake to choose from) and by then we were so stuffed with richness that putting any more butter-fat in our mouths sounded kind of nauseating. So we each had a glass of desert wine (mine a black Muscat, Brian a framboise).

With dinner we polished off a nice pinot noir and the wine list was good and the prices were not outrageous. I had steeled myself to be paying through the nose and was relieved to find a few acceptable offerings in the $27-35 range.

We won't be able to afford to go back whenever we have a whim for a good meal, but we do now have a favorite special occasion restaurant. Also, on Tuesdays, the chef leads a special 5 wines with 5 appetizers tasting for $20 which could be a good way to have a little week-night treat. It would be a lot of fun to meet up there with some friends for the tasting and afterwards go for a walk or canoe paddle at the nearby Kensington Metro Park.
Posted by Kate at 3:39 PM

I think I will have to take hubby there for our anniversary next month...mmmmm

Happy Birthday Kate! I'll have some of that Bliss in a Bowl, please.