Another justification for gluttony

I ate a ton on Saturday night. My justification is that I needed to do so in order to neglect my stomach for all of Sunday so I could finish the newest Harry Potter (I did). All I had for lunch on Sunday was a cucumber. Sometimes one obsession (finishing a book) takes priority over another (stuffing my face). The only thing I laid off of on Saturday night was the wine (for once) so I could make sure I woke up with a sharp enough brain to make speedy book progress.

Now, getting back to the Saturday night feast. We went over to Ami and John's and, in between games of bocci, we were able to watch our paella master in action: 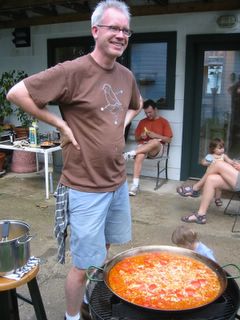 If you'd like to see John's t-shirt up close (and view other very cool shirts) look here.
Here is the paella almost ready to be eaten--it is still developing the delicious rice crust on the bottom of the pan: 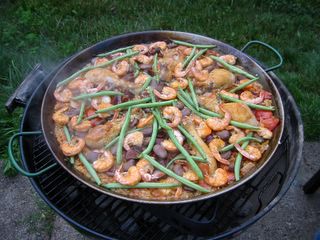 The green beans were picked a few seconds ago from the copious supply in their garden.
MJ brought a salad with a terrific toasted hazelnut vinaigrette from a Mark Bittman recipe which helped cut through the richness of the paella.

And I brought my first attempt at gelato: 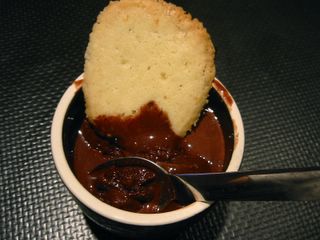 chocolate gelato with lemon shortbread cookies
The gelato was good, but didn't blow me away. The texture was fine--smooth and slightly custardy and it packed a chocolate punch, but it didn't have much aftertaste. I wish I had added some form of citrus to the gelato--maybe some orange oil or zest? Something to make the finish a bit more special. I don't have culinary memories with which to compare it because, it now occurs to me, I've never actually had chocolate gelato. When I was Italy I always ordered one of the fresh fruit flavors because they were so mindblowing--I was a particular fan of peach and melon gelato. The lemon shortbread cookies (from The Best Recipe) were delicate and buttery, but not lemony enough. I should have tripled the quantity of zest in them.

And the book? Mmmm, mmmm, good. If you are looking for a critical response to Rowling's latest, look elsewhere. I had a grand time feeling like a greedy 14 year old gobbling down a wonderful story and putting my critical brain on hold.
Posted by Kate at 6:31 AM

I did the same thing... scarfed down the book, will likely begin the whole series again this week, but don't have any real critique developed yet... still pondering I think...

Do you have a great recipe for paella? That looks terrific!

Hey Amie--
I've never actually made Paella--just consumed other people's versions. I'll ask John if he has a preferred recipe since his was terrific.