The big revelation this summer is that my kids will eat salmon. I had assumed that the two humans whose eating habits so frustrated me at one point in time that I started a (now dormant) blog about them called The Picky Eater Chronicles would reject salmon simply because they somehow intuited that kids don't like fish (believe me, that would have been one of their more rational reasons for rejecting a food).

And because I love fish but lack confidence when cooking fish--I often order it in restaurants, but have found my own attempts making fish lackluster--I just stuck with canned tuna and omega 3 fish oil pills to get some of that good fat into all of us.

But one day in June I was in Costco and I cast my eye longingly over the seafood case, trying to figure out when I'd be able to go out to some restaurant and order fish. The wild caught salmon in particular was so beautiful and orange and fresh looking. So finally, I just said, fuck it and chucked a tray in the cart. Of course, this being Costco, it was a big tray with two full long fillets, enough fish for 8-10 people depending on hunger and portion size.

When I got home, I was pretty motivated to figure out how to cook it since I had just spent $28 on food I wasn't sure anyone would eat.  I can't remember where I found the super basic technique, probably by googling "idiotically easy salmon recipe" or something like that, but I found something that has worked well beyond my wildest dreams and I now make over and over and over.

I take the filet, pat it dry with paper towels. Cut it into portions and sprinkle the non-skin side with salt and pepper. Then I heat up a ceramic non-stick pan* until it is pretty hot, put in a couple of teaspoons of neutral high smoke-point oil (like canola), and then slap in the salmon, skin side down. 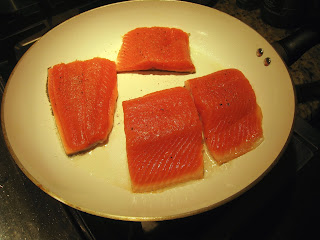 Then, this is one of the best parts, I walk away and go do something else in the kitchen for about 3-5 minutes (depending on the thickness of the filet). Don't poke or nudge or bother that fish! After 3-5 minutes, the skin has crisped up and a spatula slides right under it. Flip it over and leave it alone again for 3-5 minutes. 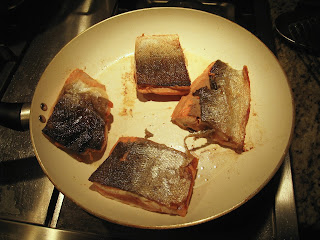 On the cut side, you can see the center of the fish start to turn opaque and use that to decide how long you want to cook it. Put it on a plate and, hot diggity, your main protein source is cooked and ready in less than 10 minutes.

So what happened when I put this down in front of the kids? Not one bit of drama. I'm slowly learning to shut the hell up so I just placed it in front of them and when they asked what it was, I said, "Salmon." That's it. Nothing more--no explaining, no preface about how salmon is mild and since they like tuna I thought I'd try this, no begging them to just try a bite.  And then my husband did something truly wonderful: he pulled off the crispy skin, popped it in his mouth and said, "Yum. Tastes like chicken skin."

Those are magic words in my house. If not watched carefully, my daughter will strip a roast chicken (or for god's sake, once at Thanksgiving, half of a turkey) of the skin and munch on it like potato chips.

And now she does that with salmon skin, too (!!)

That first night I served the salmon plain, just a squeeze of lemon on the grown ups' portions, and it was so good. Since then I've been buying wild salmon pretty much every time I go to Costco, about once every two weeks, and we eat it two nights in a row. I've also gotten better at figuring out interesting stuff to put on top of it: the cucumber yogurt sauce that I usually serve with kibbeh, the miso/ginger dressing from the baby bok choi recipe, some defrosted garlic scape pesto, all were really good and took the salmon in different directions. And best of all, the saucy stuff can be left off of the kid portions and I don't have to cook theirs separately (they still only want it plain, plain plain plain plain, thank you very much.)

Here is what this weeks two salmon dinners looked like: 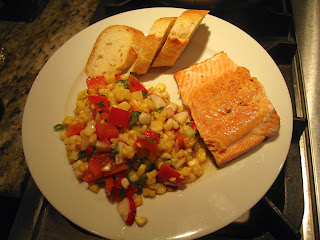 Last night the salmon was topped with lime juice and a little lime zest, served with a corn, red pepper, radish, cilantro, red onion salad (which could have easily gone on top like a salsa, except I made so much of it--hey, it's corn season--that it would have buried the salmon), and a few slices of baguette. 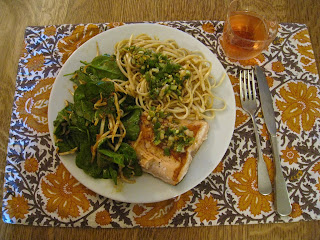 Salmon and sesame noodles topped with a riff on David Chang's Momfuku ginger scallion sauce (recipe below), served with a Korean spinach and bean sprout salad and a nice glass of chilled Provencal rose.


By contrast here is what the kid-version of dinner looked like: 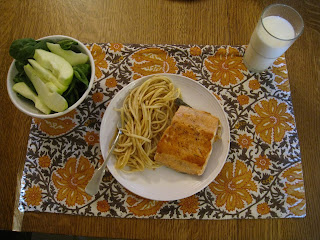 Plain salmon, plain sesame noodles, plain spinach, a plain sliced ginger gold apple and plain milk. Detect a pattern here? Oh my god they are the most boring eaters on the planet.

I enjoyed both dinners and even more, I loved the fact that both were fast to make and I got to eat them with no sour expressions, no kvetching, and no people sitting next to me sullenly poking at their food until it had disintegrated into an unrecognizable mush.

Ginger Scallion Sauce
adapted from David Chang's and Peter Meehan's recipe
My version is a bit saucier than the original and I cut the quantity of scallions and ginger in half since there are only two of us who eat it in this household. It still makes plenty and is great for adding to things like leftover rotisserie chicken or, as Chang recommends, a big bowl of cheapo ramen noodles.

Mix everything together in a bowl and let sit for at least 20-30 minutes. Any left over can be refrigerated and kept for a few days.
_______
*I love this thing. It's a T-fal ceramic non-stick that I got for about $20 at TJ Maxx and it works like a dream. The best thing for keeping it non-stick is to run a Mr Clean Magic Eraser over the surface after washing to get off any sticky oil blobs that resist scrubbing.
Posted by Kate at 7:26 PM

Yum! Definitely going to try the sauce on rotisserie chicken--that's a staple food for all but the vegetarian 11-year-old at our house (she can have it on sesame noodles). But none of us (parents included) eats fish, so you're ahead of us in that department.

Yum, tried it tonight. I cooked from frozen, and used the same strategy though with a longer cooking time. Our frying pan is not non-stick but it still came out nicely, though next time I cook the same recipe it will be on a slightly lower heat.

Ed, did you not have to thaw the salmon before cooking? I have no experience (and lack confidence) dealing w/frozen fish, but wow, I love the idea of pulling it from the freezer and being able to make dinner. I'm guessing that it would "spit" a lot more because of the ice crystals and thus require a lower heat setting and judicious use of the splatter screen.