I finished sewing a dress up cape for Fiona's preschool's fund raising auction (which isn't until November, but I'm trying to be organized this year). I made it with purple satin with little sparkles on it and lined it with light blue satin. Fiona was happy to model it for me: 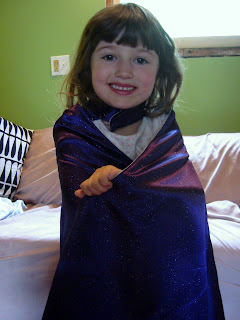 But unlike most normal 4 year olds, it didn't inspire her to pretend to be a princess or queen, or, for god's sakes, anything human. 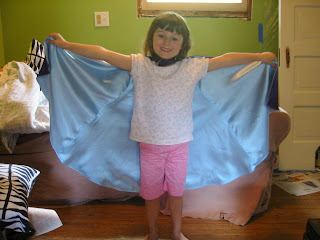 She announced that she is a bat and her name is "mosquitoes". (Most of her pretend animal characters get named after their favorite food: "Meaty" the T Rex, "Leaf" the giraffe, "Buggy" the frog, etc.)

I'm also knitting a baby sweater and hat set for the auction and, after knocking this cape out over the weekend, I'm beginning to sniff discontentedly at the amount of time that knitting takes. Even when knitting for a small person, the gratification is much more delayed.
Posted by Kate at 9:17 AM

Fiona is growing into a big girl now. I sure do miss you two coming into my office every week. She always put a smile on my face.