I've been spending Friday evenings desperate for raw vegetables as an antidote for what I've been doing all day. I'm taking the Pastry I class out at WCC and that means spending 5 hours each Friday playing with lots of butter and sugar. The pastry chef teaching the course is Terry Morrow who owns and runs the Queen of Hearts bakery in Depot Town. I haven't been to the bakery itself yet (apparently it was in Saline for a long time and moved to Depot Town recently), but Terry is great and her enthusiasm for what she does really comes across in the kitchen.

I forgot my camera the first week so I only have a photo of a couple of the éclairs that my group made once they had traveled home in a foam container: 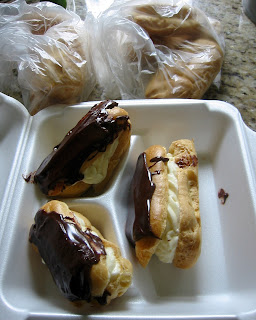 Still pretty darn tasty though! Our Pate a Choux turned our really well, as did the Bavarian creme we piped inside. The chocolate sauce we made could have used a little more hot cream beat into it to make it flow a little better, but it still tasted good.

This past week my group (we are doing European Pastries right now, and will rotate with the other three groups in the class through Tarts, Cakes and Plated Desserts) made a whole lot of stuff that we will transform into impressive things next week: puff pastry (which takes a hell of a long time--lots of rolling, folding, chilling, then do it all again) which we'll make into Napoleons, a sheet of hazelnut meringue that we'll turn into an insane sounding construction called a Marjolaine (layers of meringue, ganache and praline French butter cream all covered in more ganache) and the custards for Creme Brulee that are just waiting for their sugary crust (we couldn't find a blow torch so I'll bring mine in next week).

We didn't make anything we could eat this week, but there were plenty of things to try from the other groups; some of the things we make are frozen or refrigerated and used in the restaurant at WCC, but there are plenty of things that won't store well and won't make it until Monday or that we sacrifice one of a batch to try. First we had profiteroles with homemade vanilla ice cream: 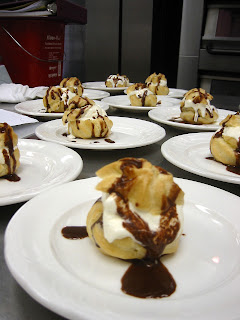 The ice cream was great, the chocolate sauce was a little thin.

Then there was the Pecan Flan, with a cream cheese filling and apricot glaze: 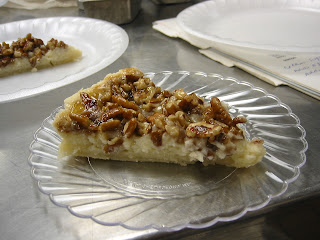 Good, but a little too sweet for my taste.

And we had Apple and Pear Charlotte with Creme Anglaise and warm caramel sauce: 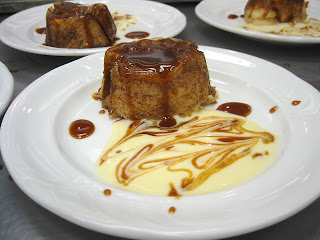 This one was my favorite, but then I'm a sucker for fruit desserts. I also came home with a slab of chiffon cake with butter cream and raspberry filling.

The atmosphere in the kitchen is one of controlled chaos--everywhere you turn there is some wonderful smelling concoction being made and it does take a little bit of discipline to stay on task and not wander over and breathe in the fragrance of, say, a fresh baked carrot cake. As far as the price for the amount of experience you get in the kitchen, this class can't be beat. The class lasts a full 15 weeks so I have 12 more Fridays of Sugar Shock to enjoy!
Posted by Kate at 1:40 PM