I know I'm not the only one who, when they hear the title The Facts of Life thinks of this: 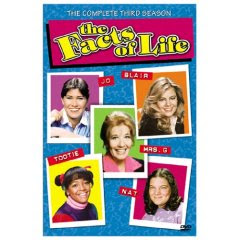 rather than this wonderful novel which I finished last night: 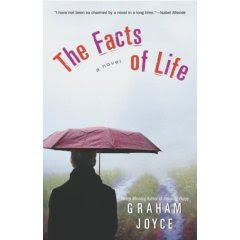 I have to admit with some degree of shame that the title and the reminder of the supremely annoying TV show with a character named "Tootie" actually kept me from picking up this book for a good long while. But I strongly urge you to look past the title and read Graham Joyce's beautiful book.

The book is set during and immediately after WWII in Coventry, England and it is centered on Martha Vine and her seven daughters, particularly the youngest Cassie, who they describe as "wayward" and "fey," and her son, Frank. When Cassie decides not to give up her fatherless child, the family bands together and agrees that they will all do their part in raising Frank. This is a beautiful portrait of how a family works together to confront mental illness with love and kindness and there is a strong message that "different" isn't necessarily bad.

There are times when the book goes inside Cassie's delusions--most memorably her experience on the night Coventry was firebombed--and at these points magical realism seeps in to the narrative. We believe that Cassie can actually see the radio waves in the sky that guide the bombers to her city, that she can briefly bring a dead boy back to life and that she can choose a bomber out of the sky and make it crash into a field.

But he book is also downright funny and much of the humor comes from the finely drawn characters. The author has a subtle touch with humor so that characterizations that could be cruel are instead kind and funny. Frank's Uncle Gordon with his stammer, receeding gums and death's-head resemblance could be a repulsive character, but instead he is presented with humor and sympathy:

Gordon was apt to display his lack of gums every time he spoke, and whatever words he spoke were preceded by a long, drawn-out whine in which he appeared to be locked in heroic or merely constipated struggle with himself while he shaped whatever it was he was about to say.

"Another slice of corned-beef pie, Gordon?"

A newcomer into the family...might lean in expectantly, politely waiting for Gordon to conclude his statement. And they might wait. And wait. And Gordon would widen his eyes at them in a kind of terror and draw his lips back over his disappearing gums, as if this predicament they both found themselves in...was just as astonishing to himself as to anyone.

Gordon might have become a caricature but later in the novel, when Frank is taking his turn living with Aida and Gordon, he is rounded out and shown in his own home, without the intense social pressure of his mother-in-law and six sisters-in-law and their families. He is a warm man who teaches Frank about death and passing in an exquisitely gentle way. By the end of the book, I wanted to go up and give Gordon a great big hug, even though he is often described as looking like "a fresh corpse."

Other moments of humor come up due to the different circumstance in which Frank is raised as he is passed from Una's farm, to Evelyn and Ina's spinster home and spiritualist church, to Bertie's experimental commune near Oxford. For example after a stay at the commune with Bertie where, instead of going to school, he is tutored by the residents in Marxist philosophy, Frank goes to his much more conventional Aunt Aida's house where he watches the television for the first time. But the two worlds come together in Frank's head seamlessly so he can enjoy the BBC Children's Hour while simultaneously continuing to refer to the television as "the reactionary hyena". Such touches of humor are subtle but are woven into the text so that what could be a grim book about mental illness, is instead a resoundingly positive story.

Really the only flaw with the book is that I had some trouble imagining the characters in the period before the book takes place--Martha and her seven daughters in their teen and adult years are perfectly realized, but I really can't picture them when they were young, all packed in the same house with their conflicting personalities not tempered by the presences of the men in their lives nor the separateness of their own homes. But that really is a small complaint. This is the best book I've read so far this year and I am looking forward to exploring more of Graham Joyce's works.
Posted by Kate at 9:10 AM

Just wanted to say thanks for the recommendation. I checked it out and loved it!