I'm really good at mad. But I'm not going to do mad right now.

I'm referring to this infuriating information: that until 12 months ago SIGG, which promoted itself as a safe alternative to Nalgene (and other plastic) bottles that contained the endocrine disruptor BPA, was actually lining their bottles with an epoxy that contained, you guessed it, BPA! They have changed the liner on new SIGGs (and were very quiet not to mention the BPA problem until the stock of the old BPA containing bottles were sold) and will give people who return their old SIGGs coupons for replacement bottles. But the whole shebang reeks of corporate coverup. The blogger Sarah Gilbert did a very nice job of detailing the sliminess--if you have the stomach to read it. (There's also a well-explained post from a store that pulled SIGGs.)

A parent on the wonderfully informative yahoo group list arborparents posted about this and another told me she received a postage paid return label. So I wrote to SIGG and asked for one because I don't want to spend a nickel more and they refused. Then I wrote to the CEO and mentioned that I knew they had issued postage paid return labels and would he authorize one.

The CEO told me that he and his kids still drink out of the bottles with the BPA-containing liner (though he neglected to mention that his family also has gills...joking!). He offered me cleaning tablets (because I don't know how to wash out a water bottle? Huh? Or maybe it's something specially formulated to block the BPAs....) which probably would cost more than the return shipping I was requesting.

Clearly I have lived too long in a town where customer service and happiness is taken seriously. So ZingTrain, if you have anyone free to give a seminar, I know of a company that could really use your services! Or maybe the CEO, Steve Wasik, should read this book: 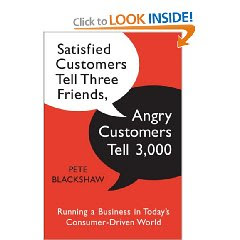 All this crummy corporate bullshit is upsetting enough but here's the worst part: I was so pissed when I was receiving and responding to their e-mails that, when my girl critter wandered into my office requesting a cup of grape juice (which, she knows, is not hiding under mom's desk but located in the fridge; however, since I keep it in a heavy non-BPA leaching Frigoverre glass pitcher, she still needs me to pour it), I snapped at her. Actually I yelled. I was so pissed at SIGG that my shoulders were up around my ears and I looked like Nixon and I dare say I behaved like him too (treating those around me like crap, not the break-in part). And the little critter jumped. And that's just not right. (I went and apologized to her and told her that I wasn't mad at her, I was mad at the crummy company that made her dinosaur water bottle. She doesn't appear to be too traumatized by her mother's inability to compartmentalize her anger though I probably should add a few extra dollars to her college/therapy fund).

And that's when I realized that Steve and his crummy company were not worth it. Not worth the anger. Not worth pursuing a free shipping label on principle even though it means that someone sleazy is getting away with something.

So you know what? I'm going to try and breathe my way through this.

So now I am turning to you folks for advice. To say that the water I drink from any SIGG will taste bitter now is an understatement. I refuse to have these bottles in my family's life any more. It just makes me too flipping mad when I see them and I don't think I want quite that much practice breathing.

I'll eat the postage to get these things out of the house and to make the company pay out for new ones because that's the only way to reach these people--through their wallets. But what should I do with the replacements since I can't stand the sight of them? (Hello Klean Kanteen! You'll be getting our business soon!) It'll be a set of 4 different sized bottles ranging from .4 L to .75 L.

I was thinking maybe I could donate the new ones somewhere. My kids' former preschool has an annual fundraising auction. Do you think anyone would buy a set of 4 new water bottles at an auction? That way at least the money I originally spent (over $50 agggggh!) would actually work its way to a good cause.

Another "green marketing" scam! Lucky for me, I was too much of a tightwad to buy SIGG bottles. Where did you buy your bottles? I'd try complaining there. I know Whole Foods sells them. Maybe they will do something about it.

Excellent idea! I got them at a mix of REI and Little Seedling, the latter of which probably has good customer service. I don't want to stick them with the bill though...

This is why I love social media. Check out the firestorm on Twitter:
http://twitter.com/#search?q=sigg

Like MK, I'm too cheap to pay for some of the bottles. I found a Kleen Kanteen (I think that's the name) online for fairly cheap and I enjoy it; it comes to school w/ me.

This whole thing is crap. It smells of the Frito Lay "we employ local farmers!!1!!11!" bullshit.

I finally got my email reply (with an apology that my email had gone into the CEO's spam folder, thus the delay). I too, am planning to exchange my bottles. It the only way to let SIGG know they really screwed up with their obfuscation campaign. I know they never said there wasn't BPA in the epoxy coating, as their CEO repeatedly points out, but the company sure as heck did everything in their power to keep from saying it. Blaming it on their retailers shortening the message from "no leached BPA" to "no BPA" is not only silly, but it *was what they were depending on* the consumer hearing.

Kate, I am planning to send my bottles back as well, and would love to combine with you for a FUMCN auction basket.
Kafi

I'm so angry about this situation. I'm thinking a famous artist needs to do a piece with the old sigg bottles that could humiliate the company. This is simply horrible.