Friends from far away

Two of my favorite people in the world, Lee and Patrick, were here yesterday on their cross country drive back to their home in Berkeley. In celebration both of their presence and of the fact that I can (finally) taste again, I made some good food for dinner. 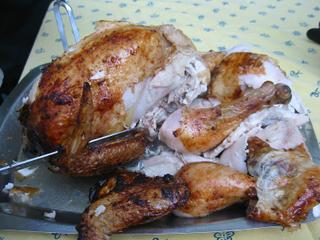 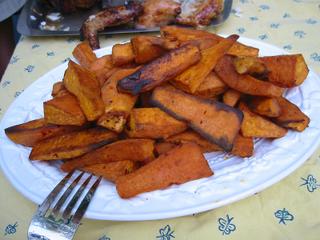 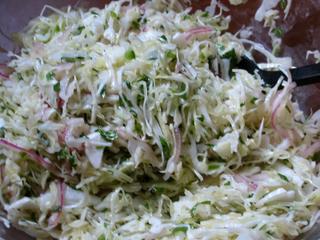 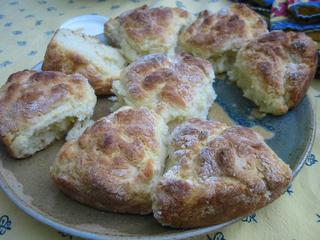 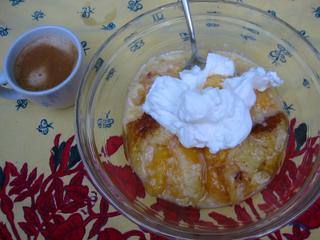 and for dessert, a Peach-Almond Gratin served with whipped cream.
By far my favorite part of the meal is the coleslaw. The recipe was published in the New York Times Magazine a few years ago (back before Amanda Hesser became the food editor of the magazine and back when, dare I say, the recipes were still pretty usable) and I always forget how much I love it until I make it and can't stop eating it.

The rest of the dinner was good, though the Peach-Almond Gratin, adapted from a recipe in Patricia Wells' The Paris Cookbook for cherries, was too rich. The almond cream that goes over the top of the fresh peaches is a wonderful flavor complement but with a whole stick of butter and a whole cup of ground almonds, I thought it was too heavy. I'd like to try spiking the topping of a regular cobbler (like this one) with a little almond extract and some sliced almonds instead.

Quarter the cabbage through the core; cut out the core. Finely shred the cabbage into a large bowl--I use a mandoline (actually a cheaper Japanese Benriner mandoline look-alike) to get it really thin and fine. It is worth the risk to my knuckles. Finely slice the red onion into half moon shapes (again, I use the mandoline). Cut open the jalapeno, discard the seeds and dice it fine. Chop the cilantro. Add diced jalapeno, onion, and cilantro to the cabbage and toss to mix. Sprinkle with the lime juice, vinegar, oil, salt, pepper and sugar and toss to coat.

You want to make this at least an hour before serving so that the salt has time to wilt the cabbage. Waters likes to serve it at room temperature, but I prefer it gently chilled.
Posted by Kate at 7:06 AM

I bet you wouldn't think a two-year-old post would still get read, would you? But this week a cabbage appeared in our weekly delivery of organic produce (we recently signed up with a service called Urban Organics) and I was like, all right, cole slaw. Hey, I remember Kate wrote about cole slaw once.

I don't own a mandoline, so I used the grating attachment on my food processor. I didn't get the nice long ribbons of cabbage as in your picture, but the taste I tried right after making it was pretty good. I'm letting it sit overnight to develop the flavors.

You are a resource indeed, Kate!

And just looked it up too MJ!