Shoving a beer can up a (dead) chicken's butt is no way to treat a poor fowl with respect. But it sure does result in a tasty chicken. 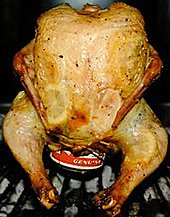 Look! I'm a chicken and I'm sitting on a beer can!
I realized that I in my last post I let the delicious Beer Can Chicken that Sarah made go un-explained. Beer Can Chicken is the only way I'll roast chicken any more. I used to roast a chicken the normal way, inside the house in my oven. But ever time I did I triggered all the smoke alarms, ended up having to put the oven on cleaning cycle because the chicken spattered fat all over the place, and also had to deal with the smell of roast chicken for the next few days. I like the smell before I've eaten the chicken, but afterwards, and say, the next morning while I'm drinking my coffee, I'd prefer to breathe something else.

So Beer Can Chicken has the outside factor going for it--less clean up, no smoke inside the house, no heat being generated inside in the summer time when it is all you can do to keep the house at a tolerable temperature. But all these benefits would be negligible if it didn't turn out such a damn fine chicken. The beer steams the chicken from the inside and the grill crisps up the skin on the outside: a perfect roast chicken.

For those of you who have never experienced the dining pleasures of supremely undignified poultry allow me to clarify the technique. You take a whole raw chicken, rub in with your favorite dry rub, pop open a can of some cheapish beer, drink half the can of beer and then punch a few more holes in the can. My current favorite dry rub is equal parts kosher salt, black pepper, brown sugar and smoked Spanish paprika. You can get creative, put slivered garlic and lemon under the skin or any wild and wacky herbs and spices you like. Some people put some of the dry rub or garlic in the beer too. Next take hold of that half empty can of cheap beer with your delicate princess hand and shove it up the chicken's butt. Ta da! You made your own little chicken stand! Light half of the burners on a gas grill (or if you are a charcoal griller you heap the coals to one side of the grill). Then you put your perched chicken on the un-lit side of the grill: it'll make a tripod leaning on its drumsticks. Shut the lid to the grill and leave the chicken for a half hour. Then rotate it so the other side is facing the lit part of the grill and close the lid again. If you want, you can turn the lit side of the gas grill down to medium now, or you can leave it on high. I have a pretty cheap gas grill (only two burners) so I usually leave it on high but friends with classier grills turn theirs down. Leave it for another 1-1.5 hours (depending on the size of your chicken). If you are doing this in the middle of winter (as I have done), extend the cooking time to compensate for the temperature of the great outdoors. Do the normal stuff to check if it is done--use a meat thermometer if you have one; if you don't, cut into the thigh where it joins to the body and make sure nothing looks bloody in there.

Now for the only hard part of the recipe--separating the cooked chicken from the can of boiling beer. There are numerous recipes for Beer Can Chicken on the web but I have never found one that explains this important, and potentially dangerous, step. Nor can I say I've ever really figured out a graceful way to do this. I suppose having a pair of beer and grease-proof oven mitts designated just for chicken wrestling would be one way, but I'm too cheap. Instead I use two pairs of tongs, one that I shove down the neck to grasp the chicken from the top and one to hold the beer can from the bottom. Then I try to pull them apart. Sometimes the chicken is an accommodating bird and slides right off. Sometimes it decides to fight like the dickens and stick to its can. One thing you don't want to do is tip the chicken upside down and drench it with the left-over hot beer (though that would be an easy way to get the can out). And whatever you do, don't drop the chicken!

I've never maximized the humor potential when serving Beer Can Chicken to others. The lid is down while it's cooking, so you don't get to see it then, and when it is done, I'm too anxious that I'll pour boiling beer on one of my friends to invite them to witness the de-canning process. But more significantly, Beer Can Chicken has gone from a novelty cooking technique (like say, the Surreal Gourmet's Salmon cooked in your dishwasher) to my standard recipe for roast chicken. I'm sure that a more creative host could come up with a terrific chicken-butt-themed party--if you do, I'd love an invitation.
Posted by Kate at 7:22 AM

re: chicken butt-themed party ideas: all attendees will be required to wear Naked Viking Chicken Hats.

For the uninitiated, thats: http://www.alohamedia.net/sarah/hats/chicken-viking/

That is the most hysterical hat! Lynne, do you think you can convert the pattern to an adult size because I'd love to make one for myself. Since I tend to look like an idiot in most winter hats (muffin head) I might as well look like an intentional idiot.