Ahhhhh. Another lovely evening with the book group. This time both the food and the book were terrific (we haven't had a book that really inspired us in a while--the food, however, is always good). This month we read Carol Shields' The Stone Diaries. 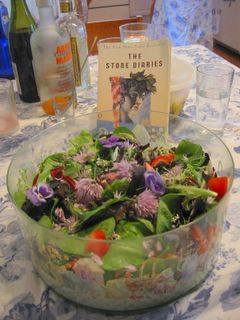 Here is the book posing with Marilyn's beautiful salad with edible flowers.
Savvy photo viewers might also notice an impressive array of bottles in the background of the above photo. Let's see, I spy: Absolute mandarin, Gordon's gin, red wine, Skyy vodka, and hiding from the camera are also the Tanqueray vodka and two bottles of white wine. Quite an impressive quantity of alcohol when you consider that only 5 of our group's members could make it last night! I managed to put away Lea's lemonade/mandarin combos, a gin and tonic and a glass of white wine. Lucky for me we were at Lea's house so I just had to (literally) stumble around the corner to get home. 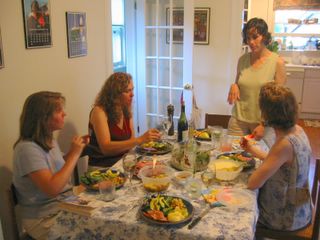 From left: Sarah, Marilyn, Lea, Juliet, and my over-loaded plate.
The menu consisted of: the beautiful salad (in honor of the main character's gardening skills), a delicious cold ham with garlic- apricot sauce (what the main character realizes she should have served one hot summer day rather than her disastrous jellied veal loaf), a corn relish (the main character's mother serves her husband cold meat and a homemade relish in the first few pages of the book) , a lemon gelatin (Juliet celebrating her Midwest roots and the Indiana setting of a portion of the book), and for desert, the amazing Malvern Pudding that is written about so vividly in the opening pages of the novel: 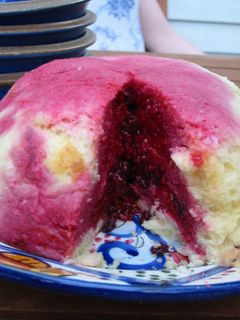 Raspberries and currants spilling out of the center.
Sarah did some research to make the beautiful pudding and discovered that Malvern Pudding is a bit of a misnomer. All the recipes for Malvern Pudding that she found were for a cooked pudding with apples, while what is being described in the book is clearly a cold summer berry pudding, of the sort shown here. 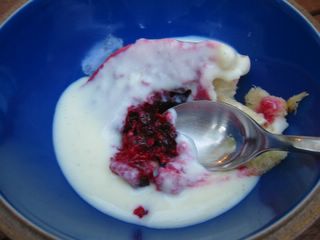 You can't quite see the flecks of real vanilla bean in the sauce in the photo, but they are there!
While not mentioned in the book, Sarah made the wise decision to accompany the pudding with homemade vanilla custard sauce. One of the few things I miss about my British relatives' cooking is the predominance of custard in the desert repertoire. After taking a few bites of the portion pictured above, I poured another half cup of custard over it.

We haven't decided what book to read next. That topic will buzz about on our e-mail list and I'll post the decision when we come to a consensus.
Posted by Kate at 6:26 AM