Yar, we are back from California. Great trip, blah blah blah. I could blather at length about it but I'll save my tedious descriptions for my closest friends who have to listen to me. Instead I'll just make references in the coming weeks to what we did, ate, knit, read, etc.

The title of this post comes from my favorite M.F.K. Fisher book, Consider the Oyster, a terrific slim volume about the bivalve (for a cool diagram of the anatomy of an oyster, click here). One of the most memorable meals we had out in CA was one we made ourselves--barbecued oysters, bought fresh from Tomales Bay. We were staying at our friend Lee's beach house out at Stinson Beach and spent a wonderful day hiking and playing in tide pools up at Point Reyes. We were heading south again, back to Stinson when we realized we had no dinner plans and that oysters are farmed, harvested and sold right on the other side of the bay we were driving along. So after a few juice-box bribes to the non-oyster eaters in the back seat, we took a little detour to Tomales Bay Oyster Company and bought two dozen medium sized oysters (only $10/dozen!).

If you ever plan to buy oysters in the shell and don't want to risk severing an artery with the knife trying to open them for raw oysters, I highly recommend barbecue oysters. I am nowhere near coordinated enough to get a fresh raw oyster open without ending up in the ER, but when you pop a raw oyster on hot coals, it opens itself! What a nifty trick! It only takes about 5-10 minutes depending on the stubbornness of the oyster. They simmer and pop a little so stand back or put the lid on the grill and check every so often.

Once they have started opening you take them off the coals, pull off the top shell and loosen the oyster, swab it with a little barbecue sauce and put it (now on the half shell) back on the coals for another minute or so. That's it! Almost idiot proof. 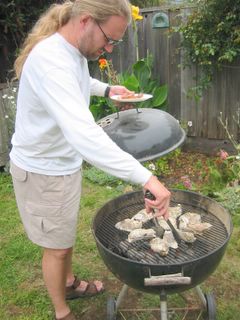 Brian shows off his tong technique 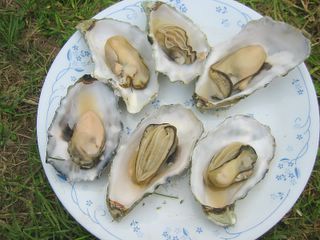 Ever so slightly poached in their own liquid 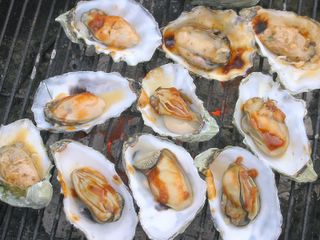 Back on the grill with a swabbing of sauce 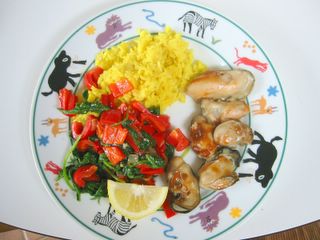 I also recommend barbecued oysters for people who like shell fish but are put off by the slippery factor of raw oysters. You don't get the cold, bright, bracing flavor of a raw oyster, but there is still plenty of ocean essence left in a barely cooked oyster. The other ways I've had cooked oysters are in hangtown fry (oysters, scrambled eggs and bacon) and in oyster stew and both of those recipes are super rich. The barbecue oysters have their simplicity going for them in that the flavor of the oyster isn't covered up with fat (not that I have any problem with covering up food with fat.)

I've never been aesthetically bothered by raw oysters and used to consume them happily with a squeeze of lemon and a cold beer, but somewhere in my 20's I developed a reaction to them raw--I'd swallow a dozen and then about two hours later would be throwing up. And this didn't just happen once, but many times in many geographical locations (CA, Massachusetts, Bordeaux) before I finally admitted to myself that it wasn't one bad oyster or local pollution but that my body had a problem with raw oysters. The last time I ate them raw, I also barfed up an amazing bottle of Bordeaux wine that I'd had with my dinner and that made me a wee bit resentful and not willing to go the raw route again.

Most of the time my body is very cooperative when it comes to letting me eat whatever the heck I want, but I seem to have a slight sensitivity (I am NOT willing to call it an allergy) to certain types of shellfish when raw. I've had hives from raw giant clam sushi, red puffy hands from shelling and deveining raw shrimp and the puke fest from raw oysters.

Unfortunately, living in Ann Arbor means that I can't afford to make barbecued oysters all the time. At $2 a pop for teeny teeny oysters at the local fish market, it'll have to be a treat I save for visits to the shore.
Posted by Kate at 7:37 PM

you always make me drool on my keyboard!

glad you had a great time on your trip! :)

I never heard of barbecued oysters -- they sound great.

Now, what did you read and knit?

Boy, Kate, I am beyond impressed that you would continue eating raw oysters not only after a single bout of throwing up, but after several. About twelve years ago I spent an afternoon on my hands and knees in New Orleans (during Mardi Gras) due to a plate of raw oysters. Haven't touched them since.

Thanks, by the way, for the lettuce delivery the other week. It made for several tasty salads.