I am very slowly getting better from this wretched cold. Today is Ian's first day of kindergarten and I think I can walk around the corner to his school without getting too dizzy.

The thing about being sick is that I get so damn bored. Lying around reading and knitting for a week sounds nice at first, but I much prefer to be sick in the wintertime, not when the weather is beautiful outside and I want to be able to play with my kids.

So in desperation, last night Brian and I invited some friends over to bring some social stimuli to me. I made dinner in lots of little steps--I'd get up, chop something while sitting at the table, then go lie down again. I didn't have the energy yet to cook in big swoops but the step by step method worked pretty well. My taste buds are not quite back to normal yet--I wasn't able to detect subtle flavors, but could tell sweet from savory.

I made a traditional Cordoban gazpacho to start. That is a gazpacho that isn't like watered down salsa--I'm not a big fan of that kind of gazpacho (I was disappointed to see Mark Bittman do a column in the NY Times where he took a basic fresh salsa recipe--tomatoes, jalapenos, cilantro, onion, garlic--and then added some olive oil and cucumber and called it gazpacho).

The gazpacho I made simply consisted of whole tomatoes (from my garden), a hunk of bread, almonds, garlic, salt, olive oil and sherry vinegar. A LOT of olive oil--a whole cup--gets poured in slowly to emulsify the tomato mixture. As a result, it tastes almost creamy. I did veer away from the traditional garnish of chopped hard-boiled egg and julienne strips of serrano ham; I went with a mini dice of cucumber to give it a nice cool, crunchy garnish. 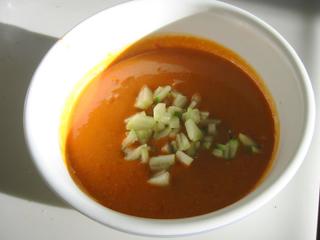 Then I made some more of that fabulous grilled corn. Here is a photo of Ami (who provided the recipe in the first place) helping with the cheese anointing: 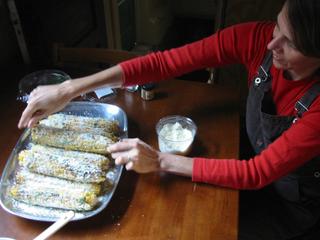 I think Ami looks like a Vermeer here with her concentration on the task at hand and the strong light source. "Woman with Yummy Corn"--an elegant title don't you think?
I also made hamburgers with Chipotle seasonings, cheddar and guacamole. They were ok, but the corn was so good that I felt like the burgers paled in comparison. And I also made the burgers a little too chubby--it was difficult to get one's mouth (even a big mouth not adverse to stretching to cram in good food) around the whole enterprise.

For desert I did the roasted peaches with brown sugar and basil and John brought some fabulous Vanilla ice cream he made that day. 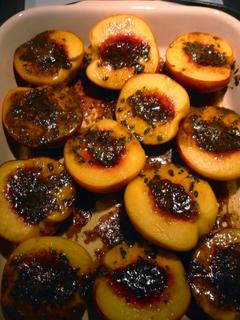 This is what the peaches looked like when they came out of the oven. 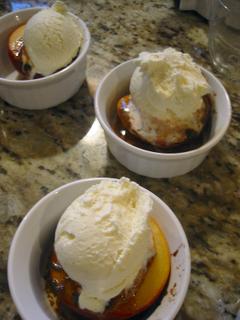 And here they are with their decadent cap of ice cream.
My taste buds weren't up to detecting the basil flavor, but Ami and John, whose flavor sensibilities I trust wholeheartedly, said it was a nice addition. John suggested a final broiling next time to crisp up the brown sugar which sounds like a great idea.

So that was my reward for no tasting and no company all week. I'm a little tuckered out now, but at least I'm not feeling like an insane cooped up woman who will assault the first adult that stumbles across her path with the demand "Talk to me! For god's sake, talk to me!"

While sick I finished reading Elizabeth Kostova's The Historian. It was a fun read while sick, but not a book I'd go out of my way to recommend. I'm not the ideal audience though, since Vampire lore isn't really that appealing to me. I was much more interested in what I thought of as historically based travel writing--I liked reading about the settings (Hungary, Bulgaria, Turkey) and the stuff that took place there more than the characters and their motivations. I also thought the book needed a better editor to tighten up the story and catch some things that were annoying blips (parents in the 1960s would not hike up to a monastery for a day trip with their 9 month old baby and then on a whim decide to spend the night--Hello-diapers??)

Now I am about 3/4 of the way through Madeline is Sleeping. It's ok--dreamy and impressionistic, but I'm not finding any of it sticking with me. I shut the book and forget about it right away. Thankfully, Ami gave me some suggestions for some more compelling reading: The Little Friend, Atonement and Being Dead.
Posted by Kate at 7:01 AM

I love your blog. Your pictures of your dishes always make me so hungry! And you have good taste (hee hee, slight pun) in books, too. Keep writing -- I completely enjoy your obsessions!

Is that The Little Friend by Donna Tartt? I didn't finish it, but there is no better guilty pleasure than her first book, The Secret History. A quick and compelling read--check it out!

I'm so impressed that you have enough energy to cook while you are sick! If I'm too exhausted from work, too hungry or my knitting is calling my name, I usually think screw cooking, let's have something quick and easy like mac&cheese. This results in the groceries that I buy for specific meals going bad before I can cook, and then the next week I buy the same food to make the same recipe. This tends to go on for weeks ...

Holy crap. I can't manage cooking that much awesome food even when I am fully well. You are a goddess.

I made that dessert with peaches and basil and it was delightful! Thanks for the tip!