Ahhhhh. That would be the sound of a well-rested, revived mind.

Stress makes my brain feel like a hot air balloon that has sprung a leak—there’s a hiss in the background of the air escaping and my thoughts are in panic mode trying to prevent a catastrophic crash If I can just get the damn balloon down to land, I’ll be ok. But unfortunately we’re flying high (yes we, you didn’t think I went up in a hot air balloon by myself did you? Oh no, one must compound the stress by bringing along your nearest and dearest all of whom are under the mistaken impression that you are a capable balloon pilot, or flyer, or floater, or whatever) and while I’m trying to figure out how to control a vehicle that has no steering mechanism, I’m simultaneously having that urge I get whenever I’m in a high vulnerable place to throw myself over the edge like a lemming.

It is high praise for all the elements of this weekend (company, place, task at hand, food) that rather than leaking hot air, my mind feels like it is doing the kind of deep yoga breathing where you inhale through your nose (noisily, as I remember, Mr. Snuffaluffagus-style) and fill up your lungs, poofing your belly out, and then slowly, completely without a panic-y leaky feeling, let the air out.

It is quite telling when the only thing that started the hot-air-hiss in my head was a small kitchen appliance. 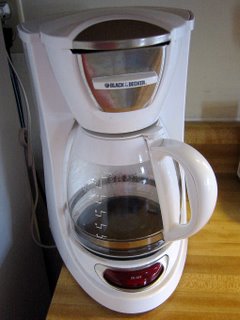 It looked like an innocent coffee maker. New-ish, impeccably clean (the entire kitchen here is so clean it looks like no one has ever used it—no burnt grease spots or mysterious crud around the burners, a bright white fridge and microwave, etc), holding the promise of early morning coffee and a few hours of productive writing before breakfast (which was an amazing leek quiche, orange date muffins, baked apples with maple syrup and pecans and fresh o.j. all delivered by the gracious proprietor to our kitchen. Burp.)

Morning is without a doubt my best time to write. Sometimes I can get a post-tea afternoon buzz going but at dawn I am much less self-critical and rigid (take one guess when I’m writing this?). But I am not a pure enough soul to be able to write without one cup of morning coffee, preferably half a cup of strong brew (or two espresso shots) with half a cup of hot milk. If no hot milk is available then I’ll take it black, thank you.

My first attempt at making the required beverage wasn’t dramatic, it was just weak as dirty dishwater, a substance Sarah’s husband calls “burnt water”. I have some difficulty adapting to new coffee makers and different grinds and types of coffee—I know how to make what I like with my own equipment but don’t know how to get what I want when faced with anything even slightly different. This one was a basket rather than a cone and the coffee was from a bag of Starbucks pre-ground house blend that the B and B owner left for us (bless her again for not leaving Folgers—one of the dangers of venturing into rural Michigan is the coffee that passes for acceptable—Starbucks was far better than what I had expected) so I wasn’t that surprised when my first attempt was undrinkable. First I dumped a ton of coffee into the filter, and then figured I was overreacting so I scooped half of it out again, started the machine and left it to go start a fire in the wood burning stove in living room. (Side note: loved the stove. Want one.) 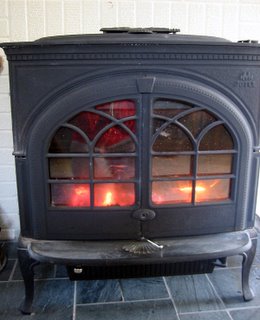 The resulting coffee was weak and disgusting so down the drain it went. I refilled the water reservoir, emptied and re-filled the basket and tried again with a hell of a lot more coffee. Started it up and went back to the stove to admire my excellent fire-karma.

I was so pleased with the crackling wood that I didn’t hear the sputtering machine, but when I went back I saw that something was seriously wrong—a black puddle oozed over the countertop, there were eruptions over the side of the basket dripping down the (formerly) pristine white exterior of the machine, and there was the sour smell of coffee boiling and burning on the hot plate. I hadn’t jammed the pot under the basket quite hard enough so while a bit of the oily brew made it into the pot; the rest had backed up in the filter basket and overflowed.

I managed to salvage a half a cup of barely drinkable coffee (it was chewy coffee since a quantity of the grounds had found their way into the pot) and made myself drink it before attempting to clean the evil machine. It was pretty clear that this machine hated my guts by then because what should have been a relatively basic clean-up kept getting worse and worse as I tried harder and harder. I managed to get coffee grounds into the damn water reservoir which, unless I could get them out, would mean that I had plugged up and effectively broken the machine.

Thankfully Ami and Sarah were still asleep and I didn’t have witnesses to the absurd wrestling match that ensued. Half a roll of paper towels and a good deal of anxious sweat and quiet swearing later, I was able to leave the coffee maker in approximately the state I found it.

The next morning I didn’t dare tamper with the damn thing. I removed its basket, boiled water on the stove and used it like a cone drip to make one half cup of strong, non-chewy, and acceptable coffee, and only poured boiling water on my hand once...

Next time I’m bringing my little one-cup cone filter (which has never misbehaved).

But hey, if that is the only stress one has experienced in two whole days it has been a pretty damn good weekend.

More to come soon on the 4 Obsessions details (what I wrote, we read, ate and knit).

So happy that your writing weekend went well, so sorry about the coffee machine, although it did make for a funny story. Can't wait to hear more! And, what are you doing up at 4:07 am?

Well there goes any career for me in politics!

Coffee grounds are the worst thing to clean up. EVER. They seem to multiply as you swipe and swipe...