Someone at Zingerman's Bakehouse needs to find their "stop" button. They assaulted my circular piece of dough (which, silly me, I thought was an everything bagel) and turned it into a damn pretzel. 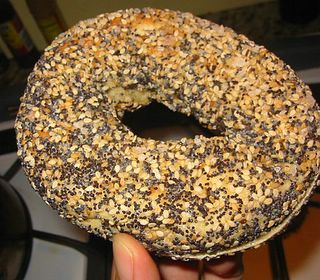 Can you see the salt crystals on that thing? Being Zingerman's of course the salt is supersized sea salt--the size of about 3 sesame seeds or double a kosher crystal--and this morning's-circular-pretzel is about as saline as they come.

And this is coming from me, a salt lover.

What am I doing photographing my bagel at 4:30 in the morning? Why procrastinating of course! I'm way too neurotic/excited about my trip to be sleeping at this hour and one of the top items on my list of crap to do before leaving is clean the cat's poop box. So here I sit, bitching about a bagel.

Not only am I here, blogging about a heavy handed bakehouse employee, I'm also eating the oversalted circular pretzel (and no, I did not take the time to pick the excess salt off). It's a little hard to get down without thinking of how seawater burns your throat when you accidentally swallow it when swimming in the ocean (another reason to love the Great Lakes--no salt in the water--though of course no lobsters either...) but hey, at least at 4:30 am, my tastebuds aren't quite awake yet.

You all do know about the only affordable way to buy Zingerman's bagels, yes? I think these puppies are about a buck a piece regularly but on Tuesdays, that unassuming day in which (apparently) people don't eat enough bagels, Zingerman's sells a dozen bagels at half price. Yes, they are fresh, not day-old. And no, they won't sell you one bagel at half price; you have to purchase the whole hopping dozen. If you are picky about your flavors, you need to get there early because by the end of the day you may only have curry bagels to choose from (I don't actually know if they still have curry bagels, but I saw them there last year and thought they were an abomination and have averted my eyes ever since from any bagel with that tumeric-ish glow).

And the folks at the Bakehouse, bless them, have absorbed enough of their Zingtrain seminars not to sneer at you as a clear cheapskate when you come in and order the half price dozen and a loaf of the bread-of-the-month (also the only way I can regularly afford their bread, though the did pop the price up $.50 this month--Farm Bread is $3.50 a loaf rather than $2.99).

Yesterday I actually violated my tightwad principles and bought a little spinach pine-nut quiche to eat on the plane tonight. I justified the price by thinking of it as defensive stomach protection that one should have to board an aircraft. Kind of like a life vest for the tummy. (It will probably make my tummy look rather like a life vest).

And since this is already a rambling, slightly hysterical (not as in funny, as in wound a little too tight for comfort) post, with an utter excess of parenthesis (that's how my brain functions at 4:30 am), I might as well go off on a ramble about Tuesdays.

Apparently Tuesdays are a popular tightwad day, perhaps because of the alliterative quality of the phrase Tightwad Tuesday. The Briarwood movies have re-opened as a tightwad house; there has been a void since the Fox Village closed for those of us not willing to spend $19 for a movie with our sweetie. But now Briarwood has opened to fill that void (until they too realize that their business plan is destined for failure). Briarwood Dollar Movies 4 has set prices at $1 before 6 PM and $1.50 after 6 PM and, get this, 50 cents all day Tuesday!

Back when I lived in Berkeley there was a Theater on Solano Ave that had Tightwad Tuesdays and it was the only way, as a grad student, that I got to go to films. And now, oh joy, there is one in that little imitation Berkeley of the Midwest, Ann Arbor. There are certain films that are not much fun on our little bitty TV at home (limited in its size since it is housed in an antique ice box)--namely dopey fun action films. But I am loath to spend $19 to go see a film like that.

I'll be seeing you other tightwads at the Briarwood movies on Tuesday evenings, and yea, I'd be happy to bring you a tightwad bagel/pretzel to enjoy with your film. (The big hitch in this plan is that my knitting group meets on Tuesday evenings at Sweetwaters. But there has been some talk of having a Thursday evening meet up at the new Caribou Coffee where the old Food and Drug used to be.)

Hey, thanks for still being with me! I didn't think you'd make it this far what with all the insane rambling...but wait! There's more!

I need to send out a quick blessing to Sarah who has come to the rescue by loaning me a set of size 2 bamboo double pointed needles so I can continue knitting my sock on the airplane. Emily, the knitting chemist, was kind enough to send me this link from the Transportation Security Administration with lots of info about knitting needles. If you had gone to their basic list of permitted and banned items you would have thought that any knitting needle was OK and since there is no link to the special considerations page that Emily located you would have risked confiscation of your Addi Turbos.

I am particularly paranoid about them taking my needles (and thus depriving me of my sanity) since yesterday I read The Yarn Harlot's latest post about her misadventures knitting on a flight with a "weenie" (her word and such an apt one) who felt "threatened" by her double pointed needles. I read most of the comments (no small feat since last I checked there were 266 comments--the Harlot has quite a following) and my favorite was this one written by a knitting flight attendant:

Right after 9-11, I was flying to London and it was a three day trip. No way was I going to be without my knitting for three days. Unlike passengers, F/A's don't check their luggage, so I did the next best thing and put my bamboo circulars in my bra, hoping I wasn't going to get patted down. Never did have a problem at all. I always will have my knitting. Even during an emergency evacuation, Guess what I will be bringing down the slide?

I knew there was a disadvantage to being small breasted. No way could I pack bamboo circulars in my bra without looking like I had some sort of shunt-like medical device attacking me.

It turns out that Bakehouse employee is not the only one who needs to find the "stop" button--ok, I'm finally going to punch mine and go clean out that cat's poop box.
Posted by Kate at 3:53 AM

Okay, we're both up way too early! I love the way Edward said you might "have hunger" -- a direct translation of the Romance construction! After that bagel, I think you will also have thrist. Take lots of water, and bon voyage!

What is it with the "new" pretzel aspect of zingerman bagels anyway. We actually stopped doing our semi bi monthly latte, peppermint tea, one bagel with lox and a ginger molasses cookie adventure due to the "new" pretzel like recipe adopted for "authenticity", and tooth breakage at zingermans. thanks for the tip in the bag o bagels... Hope you have a grand trip. I have enjoyed finding your blog.

I love your blog - happy I found it! Thanks for the tightwad tips - I am a grad student in Ann Arbor and can always use those!

HelloK e, Ive been surfing the web for the newest info on cat urine eliminator and came accross your site. the is'nt exactly what i was surfing for, but i see why i found it. Anyway, interesting read. I will continue to look for cat urine eliminator etc... I will be back to your site sometime...