The gelato tasting was the conclusion to a birthday dinner for John which, other than my kids having total melt-downs near the end, was a lovely evening. For the tasting, we sent Sarah's Brian (Brian P.) into the kitchen to prepare the tasting bowls and only he knew the identity of the different scoops (one scoop was marked with a cookie, one with a little stick of un-cooked spaghetti, and the other was plain--very clever, that Brian). 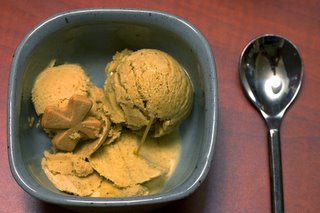 And then we all dug in and tried to determine which scoop was which recipe. Sarah got all three right and I got all three wrong....As Brian P. remarked, what business do I have writing about food when I can't even determine the presence or absence of a sizeable quantity of egg yolk!?

Seriously, they all were good, but I'm amazed that I mistook my recipe (the lowest in fat--just whole milk in there) with John's high fat recipe. I really thought it tasted the creamiest!

We all decided that we need to do this again, next time with three chocolate gelato recipes (we'll have to standardize the brand of chocolate and cocoa used) since the texture of the pistachio gelatos was a bit bumpy with all those ground up nuts in there. Maybe the mouth-feel of something that is supposed to be smooth will prove to be more revealing of the recipe source. And I think I can locate the three recipe variations.

The rest of the meal was delicious, too. I made the starter, Swiss chard and prosciutto stuffed ravioli with a tomato cream sauce. (The chard and tomatoes were the final produce from my garden--bye bye garden, till next year.) 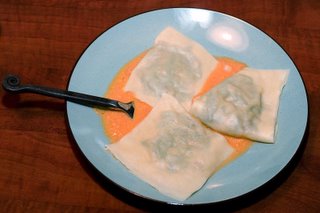 The recipe was from a recent issue of Gourmet and unfortunately it hasn't been added to the Epicurious recipe site yet. I followed the recipe with one exception--I felt compelled to grate a little lemon zest into the ravioli filling (there was also sauteed onion, ricotta, Parmesan, egg yolk and nutmeg) and I'm glad I added that little tweak because I thought it saved the dish from excessive richness and gave it a little lift. This time I followed the step by step instructions for making the pasta and it turned out much more elastic and springy than my previous (neglectful) attempts. Key to getting the spring in the dough was a much slower incorporation of the flour into the eggs. I've been pretty slap-dash in the past and thus the dough wasn't kneaded as well as it should have been.

Sarah made a terrific Portuguese chicken soup for the main course. 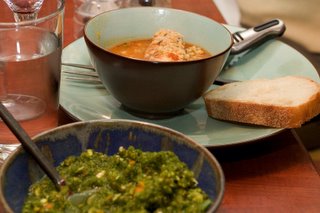 It was served with the fabulous sofrito pictured in the foreground above--annatto seeds, peppers, garlic, etc. Combined with the rich chicken and rice soup, it made for a perfect cold weather meal. Sarah promised to send me the recipe so I will post it soon.
Posted by Kate at 8:47 AM