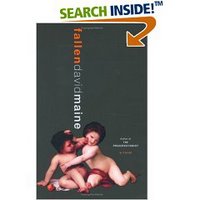 I finished Fallen today and wowza what a book.

The author, David Maine, chose to tell the bulk of the novel through Cain's and Eve's points of view. Choosing two flawed and troubled characters made the book far more interesting than if characters like Abel and Adam were telling their side of it. There are brief forays into Abel's and Adam's points of view but the bulk of the novel is through the lens of Cain and Eve.

As I've said here before, I'm a sucker for re-tellings of classics whether it be Greek literature and myths or, in this case, the Bible. In both of Maine's books (this one and The Preservationist) he takes a few verses from the bible and expands them into a full novel. And the voice in both books is curiously contemporary in its wit and wry observations, yet it doesn't distract from the biblical setting. Here is one of my favorite scenes--the Temptation of Eve in the garden:

--But I'm perfectly happy with the way things are.
--Are you? Are you really?
Eve hesitated.
--What did you do yesterday? demanded the serpent.
She frowned--I...walked along the river. I was looking for--yes, I was collecting mushrooms, which we ate. Also berries.
--Fascinating.
Eve brindled.--There's nothing wrong with staying alive.
--Certainly not. And the day before?
The day before yesterday was identical to the one that followed, as they both knew. And the one before that...
The snake watched her mockingly and Eve felt herself growing defensive.--We have all we need here.
--Oh sure, murmured the snake. Somehow, sans shoulders, it still managed a shrug. --There's a great appeal to being comfortable. If that's what you want, I won't argue. Go on then. Keep it up. Off with you! There's a lovely patch of berries just behind this clearing.
Eve didn't move.
--Better get them before the bunnies do.
Eve didn't move.
Suddenly the serpent's voice modulated. It no longer mocked, but spoke in gentle earnest tones.--The power of creation will lie within you, woman. That's what your God fears. What He doesn't want you to know.
Eve didn't move.
--Wouldn't that be preferable to wandering naked all day, plucking fruit and shitting by the river?
She had to admit, the creature had a point.--But it is forbidden.
--Only because of fear. Your God is afraid to treat you as an equal. Who knows what His plans are for you here? Or maybe there is no plan other than your remaining forever just as you are.
The serpent's voice drops to a whisper.--Day after day after day after day.
Admittedly Eve had felt such misgivings before.--The power of creation you say?
--Oh yes, purred the serpent. --You will carry it about with you and it will spring forth from your belly at your command.
Which, in a manner of speaking, would turn out to be the case.

There are so many intense emotions in this book--lust, jealousy, confusion, love, sympathy, regret--and I found the process of reading it to be so rich as to make me have to ration myself to a chapter or so at a time, or else I felt glutted with the intensity of the prose. And the reverse chronology demands that as soon as you finish the book, you have to go back to the beginning and read it again.

Most interestingly, for a work based on the Bible, I felt that the main message was incredibly humanistic--while characters have encounters with God their happiness and misery come down to day to day routines and how they live with the people around them. Their perceptions of each other and what they learn from their interactions left me feeling an affirmation of humanity's basic goodness.

For a book to get "Winter Kate" (who hasn't seen the sun in about 2 weeks and noticed that it is supposed to snow 4-6 more inches today) to say something positive about humanity at this time of year is a major accomplishment though my guess is David Maine will not be putting a quote like this on the paperback edition: "This book even made sun-deprived, cynical and bitter Winter-Kate feel OK about the Human Race for a brief moment of time!"