You can tell we had a pretty good Christmas since it started off with this fellow: 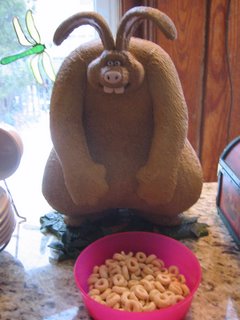 My very own Were-Rabbit figurine with movable arms. He's sitting on the kitchen counter and is approximately the size and shape of a beer-can chicken. Apparently, he is also fond of Cheerio's... 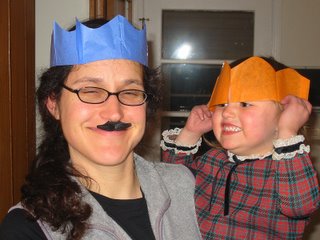 Paper crowns and plastic mustache courtesy of the Christmas Crackers. Half-shut eyes and silly look courtesy of a few too many egg nogs with lots of whiskey...

In between the above photos I made a very British meal for my parents, Brian's mom, his cousin Kent, and Kent's hysterical co-worker, Miss Neffel. (Ok, she has a first name, Diane, but I like to call her Miss Neffel.) 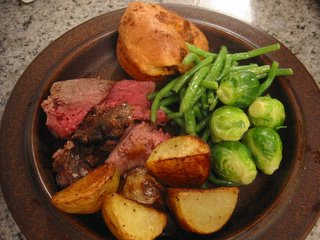 I made some little appetizer nibbles of cucumber, dilled creme fraiche and Scottish smoked salmon, which did not stick around long enough to pose for a photograph. And we ended the meal with my mom's mince pies (made with homemade vegetarian mincemeat) and whipped cream (also speedily consumed).
There were a few deviations from the British theme. The salad course was not British: baby greens dressed in a terrific orange vinaigrette (recipe below) with orange zest and topped with goat cheese, walnuts and pomegranate seeds. 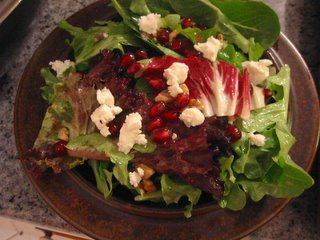 And Brian's mom brought over a Buche de Noel from Whole Foods that was more chocolate ganache than cake (No complaints here! Bring on the ganache!).

We were all too full and tired by the end of the meal to indulge in the last course, Stilton, pears and port by the fire. So I'll save these for another evening around my parents' fireplace.

Put all the ingredients in a jar and shake really hard!
Posted by Kate at 9:00 AM

ya know, we used to do the Christmas pudding but we really only enjoyed the part where you flame it with brandy, not the actual taste. Instead we'd all sorta poke at our portion and then wait 'till we could snarf down the mince pies!

I can still see shades of her plumpkin days in that picture of a grinning Fiona.