Yes I do still read, thanks for asking....

I haven't posted about a book in over a month--my usual quantity of obsessive reading has been hampered due to this being the time of year that I earn money reading and grading Greek compositions (compositions written in English, by Greek students; no silly, I don't read Greek!). It is fairly painless work that can be done while still in pajamas but it does crimp my recreational reading style.

So here's a lead in--what do a butler and a clone have in common?

No, this is not the set up for an off-color joke. Rather a lame attempt to write about some very complicated feelings raised by Kazuo Ishiguro's latest amazing book. 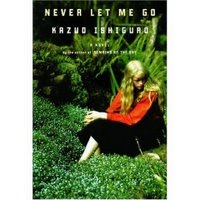 Never Let Me Go is told from the perspective of a girl clone named Kathy. Now the words "poignant" and "wistful" usually don't appear in the same sentence as "clone" but Ishiguro has managed to take what is usually the subject of science fiction and turn it into a totally, ironically, human drama. I'm not one to dis Sci-fi as a genre--I loved reading Sci-fi when I was growing up and still like the occasional journey into fiction that makes me think about alternate realities rather than about the complexities of character. Not that all Sci-fi is characterless--Mary Doria Russell's book The Sparrow had a main character as complicated as many other good novels and set him on a planet called Rakaht. But more often than not, I find my attraction to Sci-fi means enjoying the concepts and forgiving the somewhat one dimensional characters (Kim Stanley Robinson's Mars Trilogy, which I liked a lot, comes to mind.) But Ishiguro approaches the genre with such delicacy that it is almost unrecognizable despite the fact that the main concept of clones and their uses is one that Sci-fi has covered many a time.

If you saw the crappy movie The Island (which I did), consider Never Let Me Go to be the antidote to those who like a little character and complexity with their subject matter. Just like the characters in The Island, the clones in this book were created for their organs. But unlike the film, in which the entire plot revolves around the clones discovering how their keepers plan to use them and resisting this fate, Ishiguro takes on the much more complicated concept of clones who are aware of their reason for being, who accept it and who quietly go to their fate. The clones (called "students") grow up together in a boarding school-like atmosphere. They know that once they graduate they will first become "carers," then "donors" (who are cared for by the carers) until they have donated so many of their organs that they "complete" (die). The words "carer", "donor" and "complete" are really the only terms that Ishiguro uses that indicate that we are in an alternate reality.

If you have read Ishiguro's exquisite novel The Remains of the Day you will quickly realize that book, about a butler, and this book have a great deal in common in that you wait and wait and wait for the main characters to resist their fate, to question the authority figures in their lives and all they have been brought up to believe in and to make a break for it. I remember feeling heart broken that Stevens wouldn't question the people he served despite the fact that he was aware on some level that it was killing his soul and in this book, I kept waiting for Kathy to rebel, to become the clone who decided not to go quietly to her fate, to be the one that gets away. But that would be too easy.

Sounds incredibly depressing, yes? But somehow it isn't. It is wistful and sad but I couldn't help feeling that one of Ishiguro's main points was about the power of community, even if that community seems to support something that turns your stomach. The "students" in this book draw together to care for each other, they help each other to accept their fate and they ease each other's pain. The fact that in playing these roles, they end up supporting the structure that will kill them ("complete" them) is disturbing.

The main characters in this book die before they are in their 30s but the comparison that kept coming to mind was that of a senior citizens home. As people age and die, do you really want to be the last one alive? Rather than feeling horror when they come to the point in their lives when they become donors, the students instead feel relief. In this book, community is what gives meaning to life and when that community starts to crumble life is far less appealing and it is easier to let go (and there we have a further dig in that the title keeps a running reminder that our instinct is to hold on tight). So Ishiguro manages to make a book about clones and organ donation into a meditation on the meaning of life, community and purpose.

All of this is made more poignant by Ishiguro's exquisite writing style--clean, clear, never frivolous. He knows how to insert the one image that will sock you in the gut and I, for one, never saw those punches coming. The last few pages, in particular, were so beautiful and sad that I think I will remember them forever.
Posted by Kate at 4:43 PM

Have you read Ishiguro's An Artist of the Floating World? I loved that book. I'm going to try Never Let Me Go. Sounds intriguing.

A girl after my own heart (I share the same obsessions, particularly the first three)! I read Never Let Me Go a few months ago and it hit me so hard. Haven't talked to anyone else who's read it, so I was pleased to see your blog. One thing that Ishiguro didn't address (well, his characters didn't) was suicide--did you wonder about this at all? I sort of expected/hoped Tommy or someone would kill themselves as an act of defiance.... Anyway, you've inspired me to keep a record of what I read. I keep meaning to, now I definitely will.

We love you Kate! Get ready to read some more comps. beginning in May!