I've been sorely remiss in attending to my gelato duties. Zingerman's has been making gelato for at least a few years now and the only taste I've had of it was a wee scoop of melon gelato that came in a little prosciutto cup at a dinner at the Roadhouse (nice combo, by the way). Tonight, duty called in the form of Brian taking the kids out and no rain (it's about bloody time) so I walked down to Zingerman's and tried their gelato for the first time.

This is what remains: 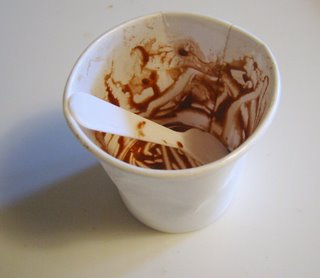 I thought about tearing the paper cup open and licking the residual drips, but I was walking home through my neighborhood at the time and decided that maintaining some facade of sanity would be a good thing. Don't want to be known as the neighborhood paper-licker.

I tried the Chocolate Heat: a dense dark chocolate base with fragrant cinnamon mixed in. It was very good--perfect texture and temperature, not overwhelming in the creaminess department, strong punch of flavor. My only critique is that it says that this gelato contains a little cayenne and ancho chile powders which were so faint as to be undetectable. Were I the gelato mix-master, I would up the heat factor so that it would more closely resemble my darling Vosges Red Fire chocolate bar (and my imitative spicy hot chocolate).

The flavors available are limited; also in stock at the deli today were lemon, raspberry, coconut, chocolate, vanilla, and hazelnut. I'd like to try the Cajeta (goat milk caramel and cinnamon) and burnt sugar flavors which I'm hoping they have regularly at the Creamery; the other two flavors that tempt me (ginger and espresso) are sadly not available until the autumn. I'm also hoping that there are other flavors that appear occasionally that aren't listed on their webpage (like that scoop of melon gelato). I'd love to see a peach gelato (yes, I can wait until August when Red Haven peaches are in season) since one of my fondest memories of Italy involves eating peach gelato on a Ligurian beach at sunset. I'd also like to see added to their standard flavor line up some of the Italian regulars like Stracciatella (chocolate chip) and Torrone (honey nougat).

For you local folks, Zingerman's Creamery website has some gelato dates to note:

June 3--opening day of gelato season and free mini-cones at the Creamery. Bring the small people! (Kids love small cones. Kids love big cones, too.)
Every Wednesday--buy 2 get 1 free gelato.
Every Sunday--free tours of the Creamery.

For the last item, any food-obsessed local friends want to meet up for a tour some upcoming Sunday? Remember, it is more fun to groan about the pleasures of abundant butterfat with friendly witnesses who can mock you later.
Posted by Kate at 6:13 PM

I will attend you on the Creamery tour! Just have your people get in touch with my people.

I don´t knit, but the other three obsessions are there all right. Substitute mine for drawing. I love your blog, very cool.
http://lobstersquad.blogspot.com

My favorite gelato is Chocolate Masala - as in Garam Masala spice. We had it last year in Quebec City at a local farm market and it was spectacular.

Living up the hill from American Spoon's Gelato Cafe has been a sore trial for my diet. My favorite there is hazelnut with chocolate, or pistachio with zabiglione. mmmm.

Okay, we are definitely going for a gelato trip now. We first tried it when we were in Rome a few years ago (where it is available at every corner), and fell in love. Mmmmm....summery goodness.